Thank you so much for all your support and feedback over the past week. Wow. I just cannot believe (well….actually knowing you all I can) just how happy you are for me to do well. Honestly, I am not really sure why. I did not undergo anything special, and I know a heck of a lot of people have more setbacks than I do, but I do REALLY appreciate it.

I thought you may want to know more about the experience than just the race itself. The race was incredible, as I hope you read about in my race recap, but what about the build up to it and the few days before?

Don’t worry, I am going to share that with you 🙂

As you know, I flew back to England about 9 days before the race. Usually when I go home, I tend to fly into overdrive; trying to cram as much as I possibly can in; scheduling people in, and trying to do all those things I miss as quickly as possible.

Usually by about the first weekend I am EXHAUSTED. It is always an amazing time, but lets just say my running definitely takes a back seat….I am talking a 15 minute window between finishing my run, and leaving again for my next thing to do…..yes, that does include time for “stretching” (which as you can imagine is not exactly thorough), and showering.

This time however, the focus of this trip was the race. Coming home definitely helped to take my mind off things, and gave me other reasons to be excited to be here, and enjoy the time, rather than wishing it away as I just wanted to get to the race. Steve made me promise that I would keep the race in the forefront of my mind during my time at home…..well, the part before the race anyway, the last week at home may have been a little overkill on trying to do everything.

The days before I left for London, I spent my time in St Albans, my hometown, and I did see friends and family, but overall it was very relaxed. I left enough time for my runs, I stretched and rolled after my runs, and I definitely made plenty of time for putting my feet up. I think this helped, and actually I think it was perfect for the race because I was distracted by all the new and exciting people to see, but I did not go to 6 different houses in a day.

I had a great run with Tom Craggs midweek, we discussed the course, and talked about the race. This was such a huge help, and Tom has been so amazing this segment, I am so thankful. I then had a massage from legendary coach Nick Anderson. Nick is amazing. I have known Nick for a long time, even traveling with him and his group to Portugal once. Although it had been a long time since I saw him, he was exactly how I remembered him, and I soaked in every piece of advice he gave me before (and after) the race.

After my run on Friday morning, my dad and I made our way into London, which is a very easy process from where we live.

When I was racing at Chicago Marathon, I had talked to Dave Bedford (a running legend in England) about racing the London Marathon. He told me the Championship section would be better for me rather than with the elites, but he did say he would get a hotel room covered for me. He held that true, and put me in touch with Glenn Latimer, the elite coordinator.

I was so grateful to get a hotel room, and I ended up having a room to myself, which was even better. I have had some lovely roommates for races, but it is always nice to not worry about others pre-race rituals.

Once we checked in to the hotel, we were surrounded by running celebrities, within 5 minutes we met Steve Cram in the elevator. I could not resist asking him for a photo! 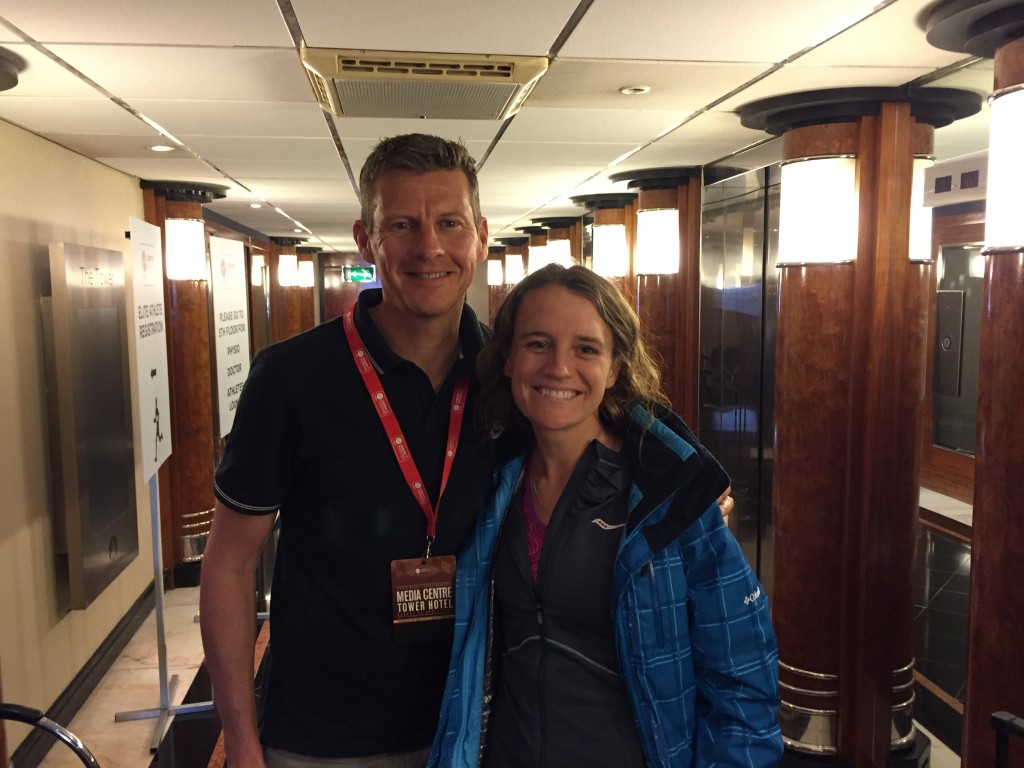 I picked up my packet from the London Marathon staff, and was even given travel reimbursement and per diem to pay for some of my food!

After some lunch, we headed over to the expo, where I talked to Nick and Tom again, and met Sarah (another Runners Connect writer). Most elites do not go to the expo, there is no need as you are given your number, but I do actually like going. I love the buzz and excitement, and there are usually people to see! 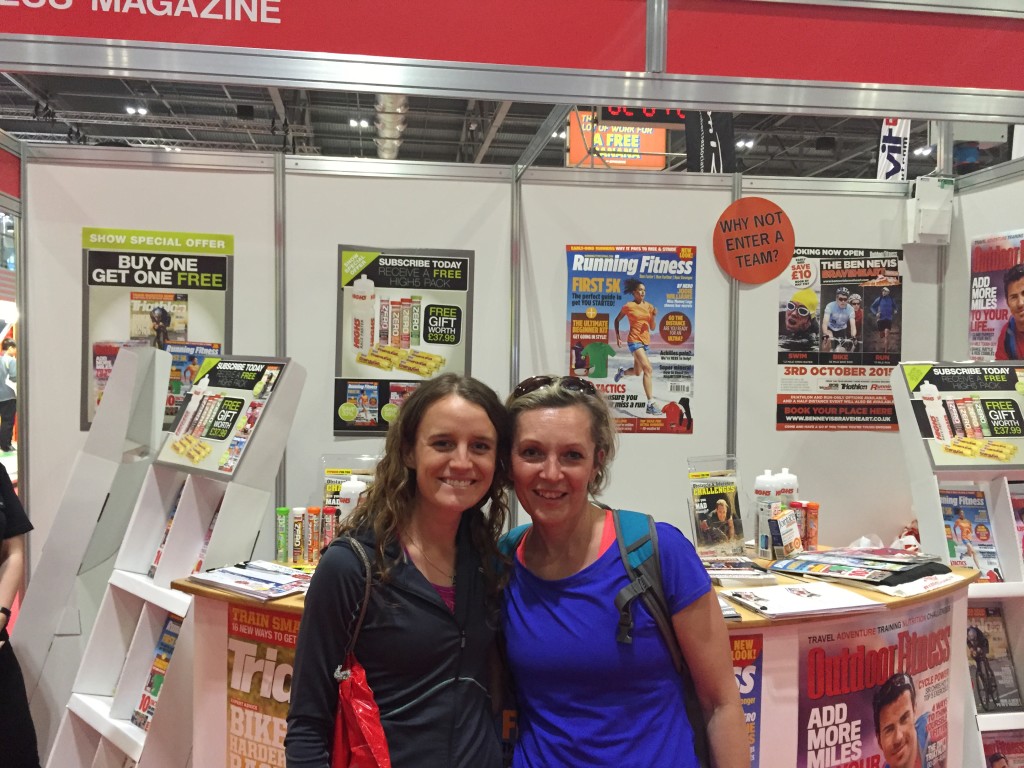 That evening one of my best friends, Anna, came to visit me, and we went out for dinner in a restaurant in St Katharines Docks. It was good to be distracted, and chat about things other than running. 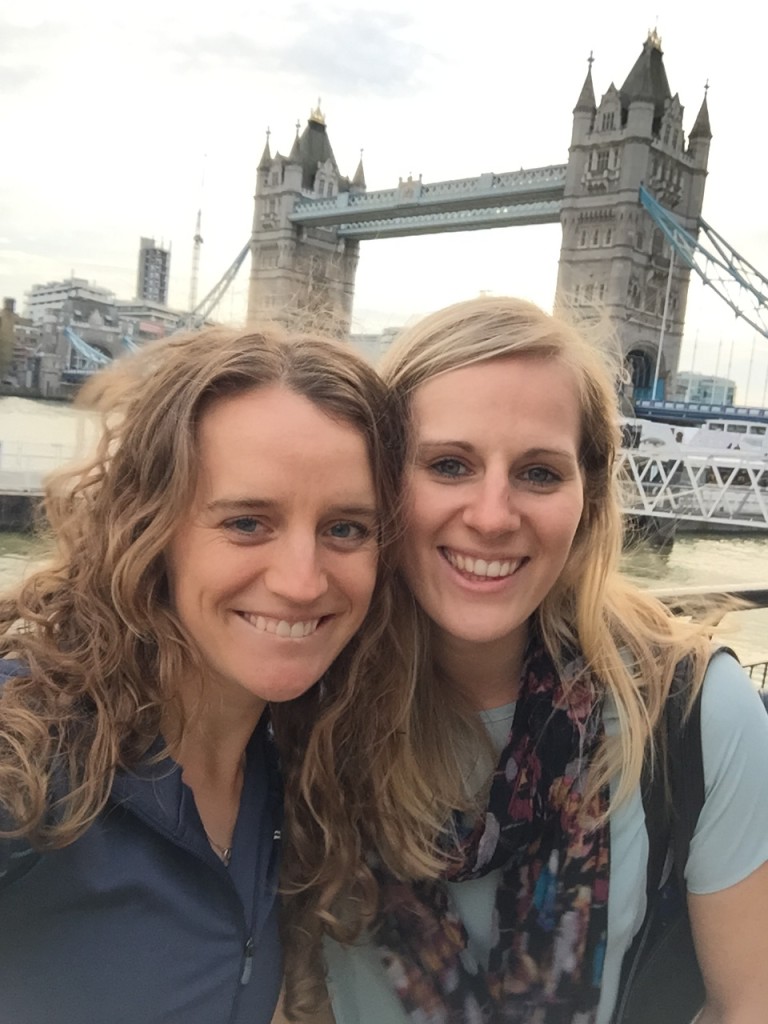 I woke pretty early that morning, excited about the day, and just unable to believe that this was actually happening.

At 8am, I met Tom in the lobby, and we ran towards Embankment (the final 3 miles of the course). After about a mile, Edwin Kipyego joined us for the rest of the 6 mile run. It was the perfect day-before run (even in the rain), and I felt great! 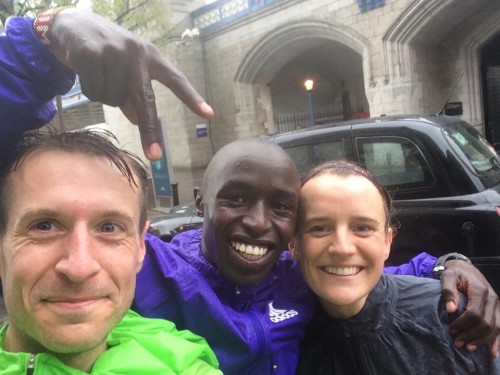 There was a breakfast room for everyone staying in the hotel, which offered just about every kind of food you could imagine. It was hard to just stick with the white starchy carbs when there were things like smoked salmon being offered, but I wasn’t going to risk anything now. Realistically would I have been fine to eat other things that morning? Yes, most likely, but with my fueling disaster in Philly, I am not taking chances!

After a big breakfast, another best friend of mine, Kat came to see me for a few hours. We relaxed for the most part, and then went for a little walk across Tower Bridge. It made me even more excited about running it the next day. 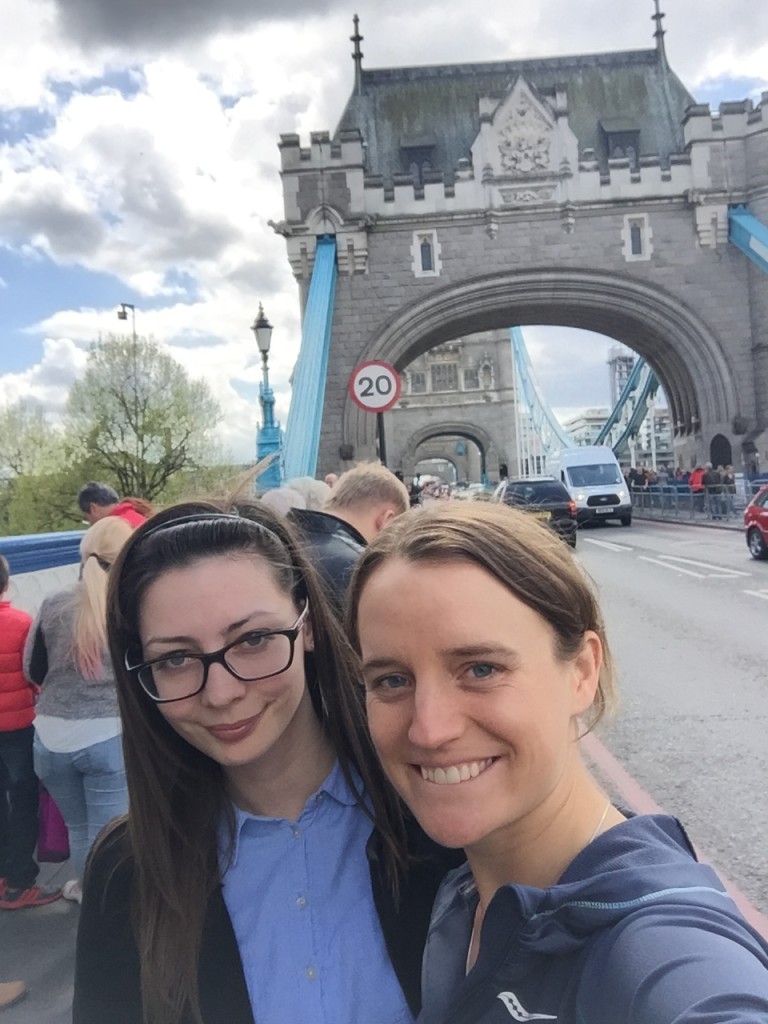 That evening my parents, sister, and auntie came to my hotel for dinner, and we went to Strada. It was hard watching them order all these extravagant meals, when I had to stick with tomato sauce and plain pasta, but Strada were amazing, and brought a huge portion of homemade pasta. It was really good! 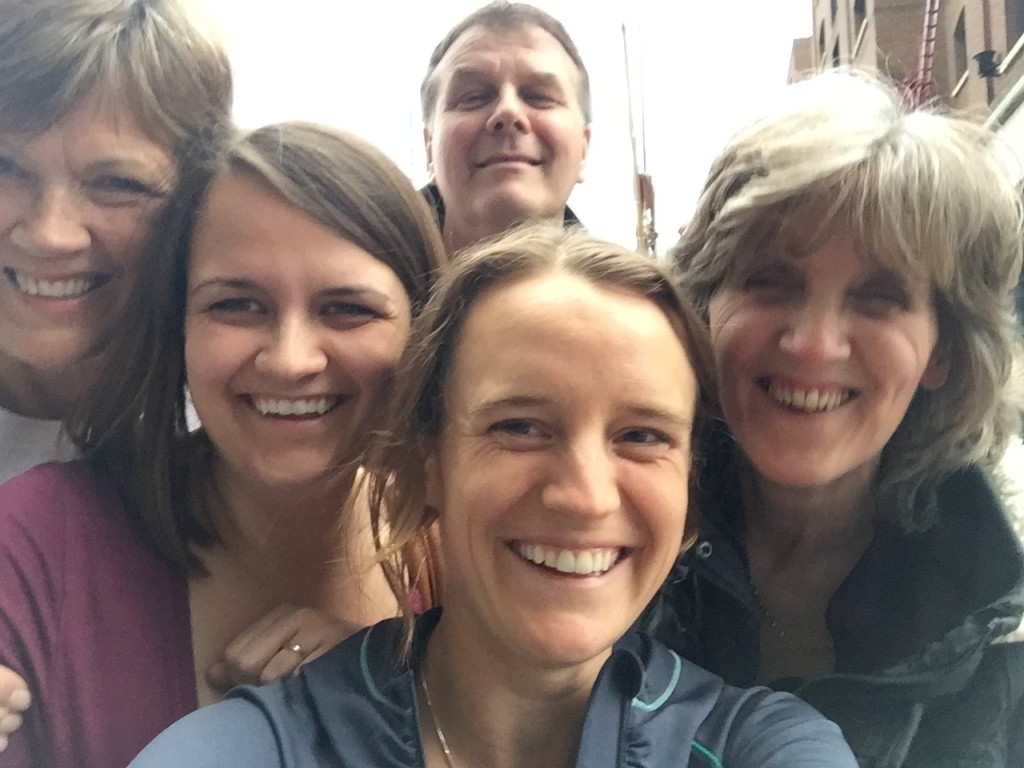 My family hugged me lots of luck, and I began my tossing and turning for the evening 🙂

The race started at 10:10am, which was very different to most races, but was actually nice as it gave me lots of time to get my body moving that morning. After a pretty restless night, I finally got up at 5, went down to the breakfast room, and had a green tea. There were plenty of athletes filling their plates (and bellies) with carbs galore, but I ignored the voice in my head telling me that I should be copying them (see even elites are influenced by what other elites are doing!).

I went back to my room, re-read my good luck cards, watched a few videos, and headed back to the breakfast room for real this time 😉 Sat down and had my 1.5 bowl of oatmeal (porridge) with honey, and bananas. Naturally Paula sat one table down from me……but I resisted the urge to bother her (having done that the day before), and especially as she was asked for photos every minute.

Here is the moment I met her the day before, I don’t know what I am looking at, but I still can’t believe I ended up warming up with her! 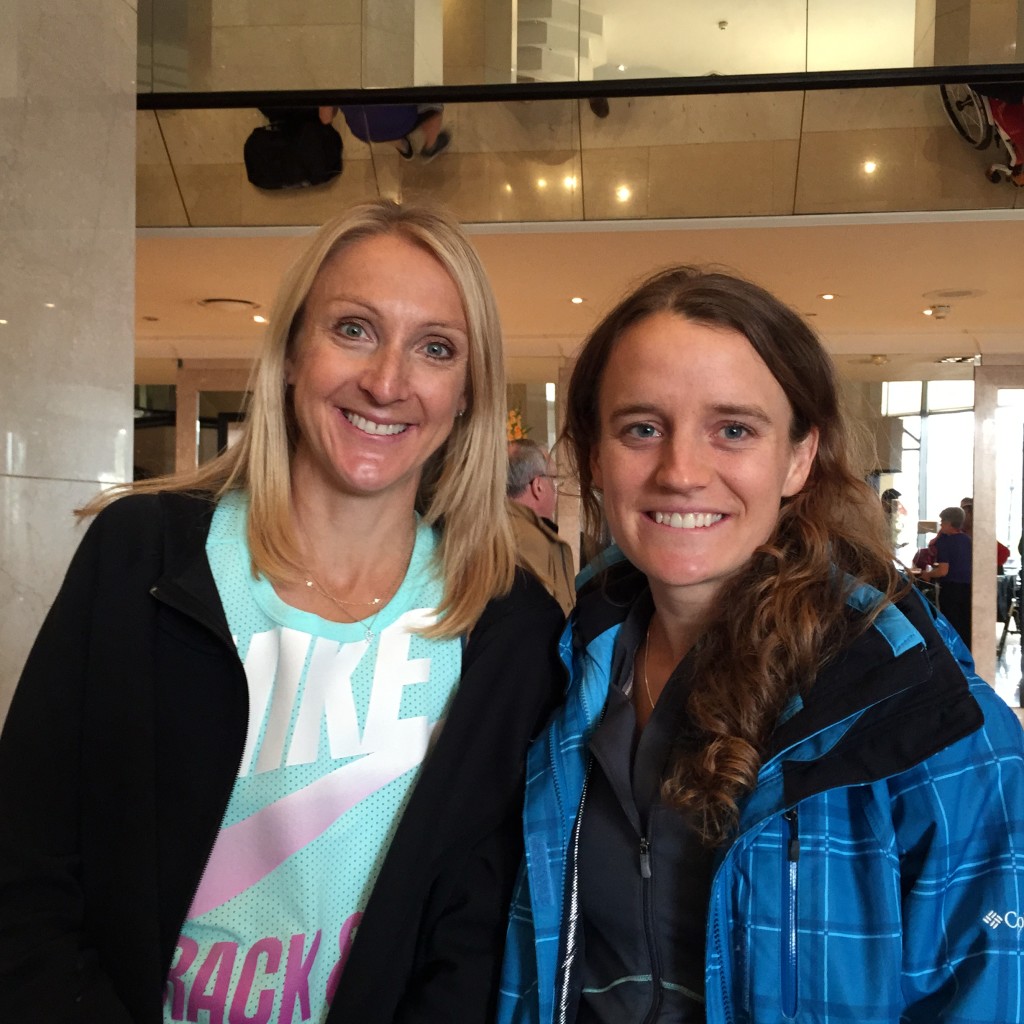 At 6:45am, the elites (and their managers) walked over to tower bridge, and we loaded 4 double decker busses headed for the start line. Unfortunately, we ended up having to wait a while before we could leave, but I am not sure who we were waiting for.

By the time we reached the start line, we were all desperate to pee (at least we were hydrated right?), so we all jumped off and headed to the bathrooms. This is where I parted ways with the other elites, and went to the blue start.

I sat in a tent for the next hour or so, which filled up more and more as time went on. Other than having no internet to distract me, the time went by reasonably quick, and it was soon time to warm up.

And that is where my story ends, if you have not already, you can go back to my race recap post to learn about the race itself, or you can jump forward to my London Marathon reflection of what went right, and what we would change.

What do you like to do the day before a race? 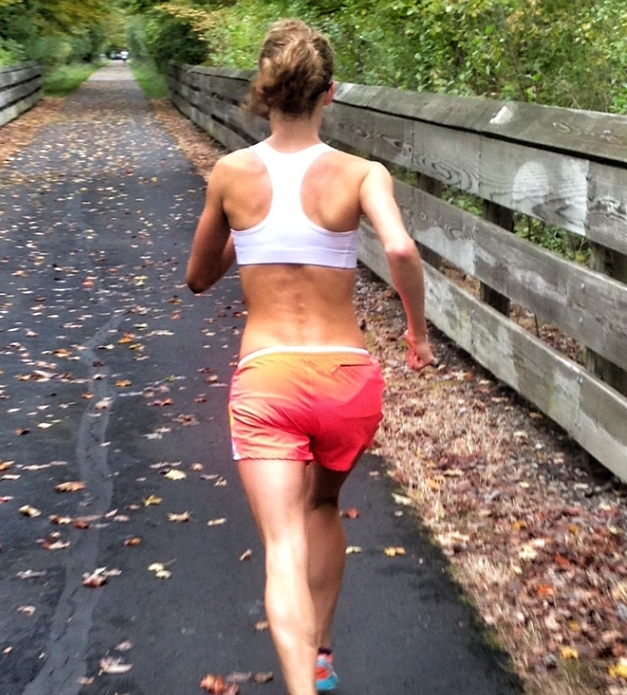 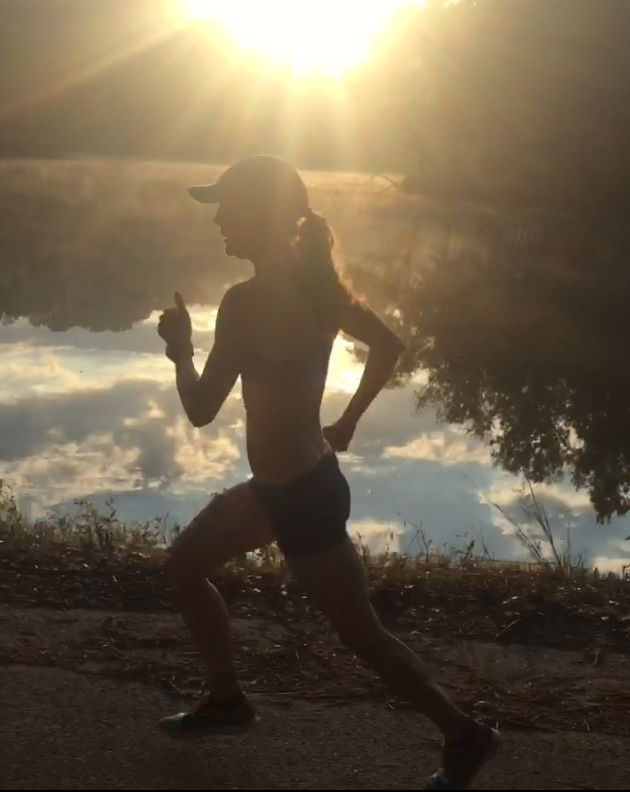