Esther and I have known one another for quite a few years now. We met through my darling bridesmaid, Frances Koons, and we have had many long runs together over the years to chat about live and running while I was in Philly. I have featured Esther on my blog before, primarily in my Female Body Image Changing For the Better post, but I have also mentioned her other times.

Esther has been an amazing example of running smart, she always executes her races perfectly, and it was holding back in the US marathon trials last fall that earned her a USA jersey for the World Marathon Championships (which she ran a few weeks ago). She comes from behind, and finishes strong when it really matters, which is so admirable. This post is a different take than the other posts, but I am sure many of you are going to find this SO helpful!

Hi!  I’m Esther, and Tina very kindly asked me to guest blog on her website during her wedding.  I chose a topic that has been pretty relevant for me lately as I train for my next Marathon.

I’ve seen my biggest running success in the marathon with a PR of 2:33:15 from Boston 2014, and winning the 2014 US marathon Championships in 2:34:00.  I thought I’d share what I think has been one of the biggest secrets to my success (aside from the awesome support I get from the New York Athletic Club, Skechers, and most importantly, my coach Terrance Shea).  Hopefully my experience can help you, too! 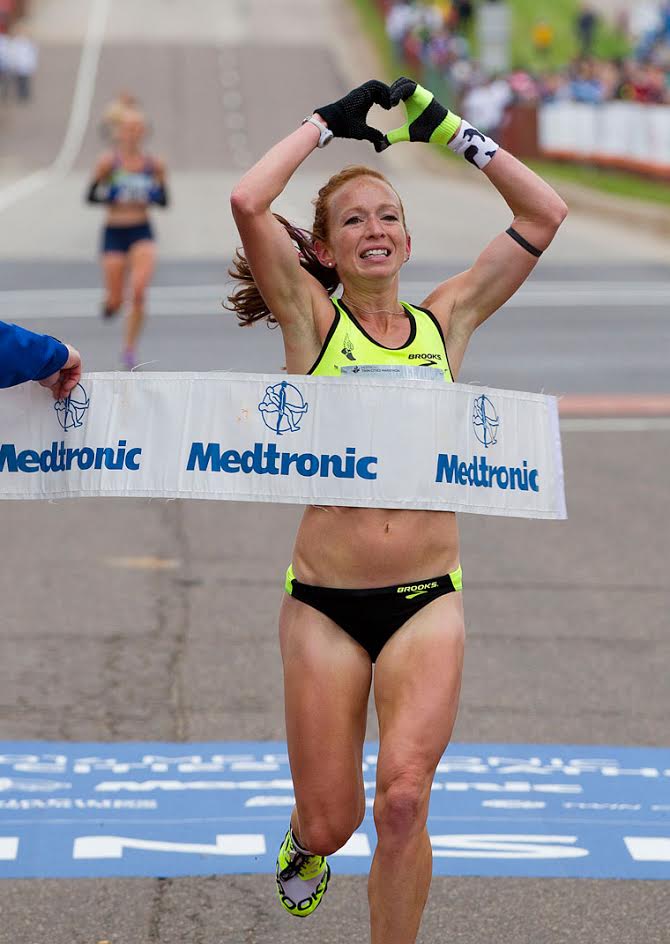 I love coffee.  In fact, writing this right now, I’m sitting at a coffee shop, desperately wishing that I could drink a cup to help me focus and accelerate my writing process.

But… today is not a workout day or a race day, so I can’t.

It started while I was at ZAP Fitness in 2011.  My coach there, Pete Rea, was trying to help me address my long-standing struggle to keep my iron levels up.  He suggested that one way to help elevate my iron would be to eliminate coffee from my diet, since it decreases the absorption of iron and other important nutrients.

At that time I would regularly drink at least 2 cups of coffee once or twice a day, and going cold-turkey seemed impossible.  I tried it a few times, but I felt like my quality of life plummeted  without coffee.  I was less pleasant to be around, my runs were slower, I was tired all the time, all that yucky stuff.

It was especially impossible in the winter when there’s nothing like a hot cup of coffee in the morning to help clear the cobwebs of overcast dark wintry mornings.

Aside from a few painful attempts that were somewhat loosey-goosey, I didn’t stick to that restriction regimen on any regular basis until my build-up for Boston 2014.  About 10 days out from the race, my current coach, Terrance Shea, suggested that I cut out coffee.

The main theory for his suggestion was that abstinence prior to the race might give me an added buzz when I’d drink coffee on race day.  But there were a lot of other benefits (and discomforts) that I discovered that week, which were the ultimate reason why I came up with my current restricted coffee regimen for “serious” training periods.

One of the first things I noticed during my week away from coffee was that I was absolutely and totally exhausted.  At times when I would normally reach for another cup of coffee, I had no choice but to lie down, which is probably what my body really needed anyway.  It was quite impressive and almost scary to realize how well coffee had masked my sleep deprivation.

At the time when I took myself off coffee, I had been taking 2 graduate-level classes and coaching at Rider University in addition to running 105 miles per week, and racing nearly every other weekend during that cycle.

After going off coffee, I vividly remember a day when I drove to a park to go for a run and was so lethargic that I just passed out in my car for an hour instead.  At that time, I had also been struggling to sleep at night, and was afraid that I might also be suffering from over-training on some level, since that is one of the symptoms.

Because of my sleep issues during that cycle, I had tried giving myself a noon cut-off for coffee consumption.  Then noon became 10am, and I would still find myself lying in bed awake and reaching for my screens.  I’ve tried all kinds of ways to get the same sleep benefit without cutting out coffee entirely, but no-coffee days have been the best solution.

Benefit number 2 of restricting coffee consumption: slowing down on your easy days

The second thing I noticed during that terrible week before Boston 2014, which ended up being a huge PR, was that my recovery runs felt absolutely terrible.  I found myself (a 5:50 pace marathoner) struggling to run under 9:00 per mile on my easy runs.

Coffee gives me the ability to run much faster on my easy days without even noticing it.  That means that if I drink coffee, yes, I’ll be able to get my easy runs done much sooner and feel much better, but it also means that I’m putting added stress on my legs when the objective of an easy run is simply bloodflow and recovery.

In my earlier years of running, I used every single run every single day to assess my fitness and ability.  It was exhausting and very unstable.  Especially since I have started selectively using coffee on hard days only, I have learned to assess my fitness less and less, and essentially only on key workouts and key races.  The rest of my runs just serve the purpose of getting me to the next workout healthy and ready to go.

Benefit number 3 of restricting coffee consumption: being more in touch with your dietary needs and getting more out of your diet

In terms of the original reasons why I started restricting coffee, I haven’t been able to scientifically confirm that coffee blocks iron absorption in my system.

This spring, I have been able to isolate that ferrous sulphate doesn’t seem to work for me to elevate my ferritin or other iron levels while training at a high level.  At best it stabilizes my levels, but even still, that’s keeping my ferritin right around 17-20.

There are three things that I have found definitely work for me.

The other thing that I have systematically found to help ten times more than anything else was… wait for it… time off.

As much as we don’t want to hear it, rest and recovery seem to always be the magic cure for so many of our issues, which is another reason to keep your recovery runs focused on just that – recovery.

Whether it blocks iron absorption or not, I do know that coffee is a diuretic and a stimulant.  It makes sense to me that if just the smell of coffee is capable of rushing me to the bathroom, it must have an acceleratory effect on the digestive system.

If already difficult-to-absorb nutrients are being rushed through the system, that can’t help the absorption process.  Also, because of its appetite-suppressant quality, I do feel like coffee can easily distract me from getting all of the regular snacks, meals and proper nutrition that I need to keep me running.

And finally, the original reason why Terry had me cut back on coffee.

Does it help me more on race day?

Absolutely. For me, running with coffee is like feeling normal again.  As I’ve told Tina before, I only feel like an elite runner 2 days a week. The rest of the time I’m just like any other neighborhood hobby jogger.  And my coffee restriction only contributes to that phenomenon.

Coffee restriction does certainly give that added boost that I wouldn’t get from coffee if I drank it every day.  But, I also think that by having 1-2 cups the morning of all workouts, long runs, and races (about 2 times per week), my body is acclimated enough to coffee consumption that I don’t feel like my heart is going to jump out of my chest come race day.

And mild acclimation also seems to help to avoid issues like having to poo in the middle of a workout… or a national championship. ;-P (Editors note: yes, in the marathon National Championship Trials, Esther, in 4th place at the time stopped at mile 22 to use the bathroom……and ended up winning the race!!).

Bonus benefit of restricting coffee consumption: I can’t wait for my next hard workout or race!

One of my favorite podcasts (Editors note: Other than Runners Connect right Esther? 😛), Freakonomics, had an episode about “temptation bundling,” which basically means pairing something you love to do with something you tend to put off, so that you’ll be more excited to do it.

I’ve done it before by bundling certain podcasts with solo long runs, but coffee and workouts is another one of my temptation bundles.  My guilty pleasure becomes a bribe so strong that sometimes I almost can’t sleep because I’m so excited to drink coffee the next morning before a workout or race. 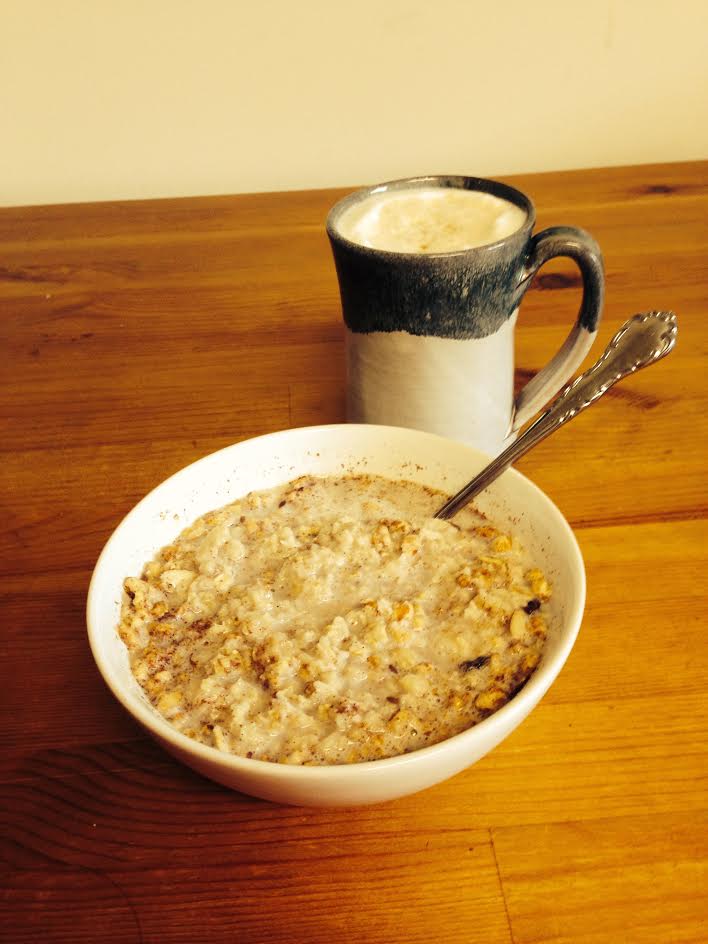 Coffee can be used as a crutch.  If overused, it allows us to dissociate from our own bodily needs long enough to do some serious damage, especially while training at a high level.

Worst of all, it can restrict our two most valuable sources of recovery: sleep and nutrition.  Plus, just like any drug, coffee starts to lose its effect if you use it too often, so without enforcing limits, we may end up entirely missing out on the benefits that it has to offer.

Yes, there are lots of benefits of restricting coffee consumption, but people react differently to caffeine, and I can’t promise that you would feel the same way if you followed the same regimen as I do.  I also know that most people don’t have the luxury of being able to trade that afternoon cup of coffee for a nap.

That’s the reason why I can’t hold to this type of regimen year-round either.  Sometimes things get hectic, and you have to make exceptions, but this type of restricted coffee use is what has worked for me, and it’s what I would recommend for those final 6 to 8 weeks before a major target race.  I hope it helps!

[bctt tweet=”WOW! I am reconsidering coffee after this post from @Estherb86 on @tinamuir blog!” via=”no”] 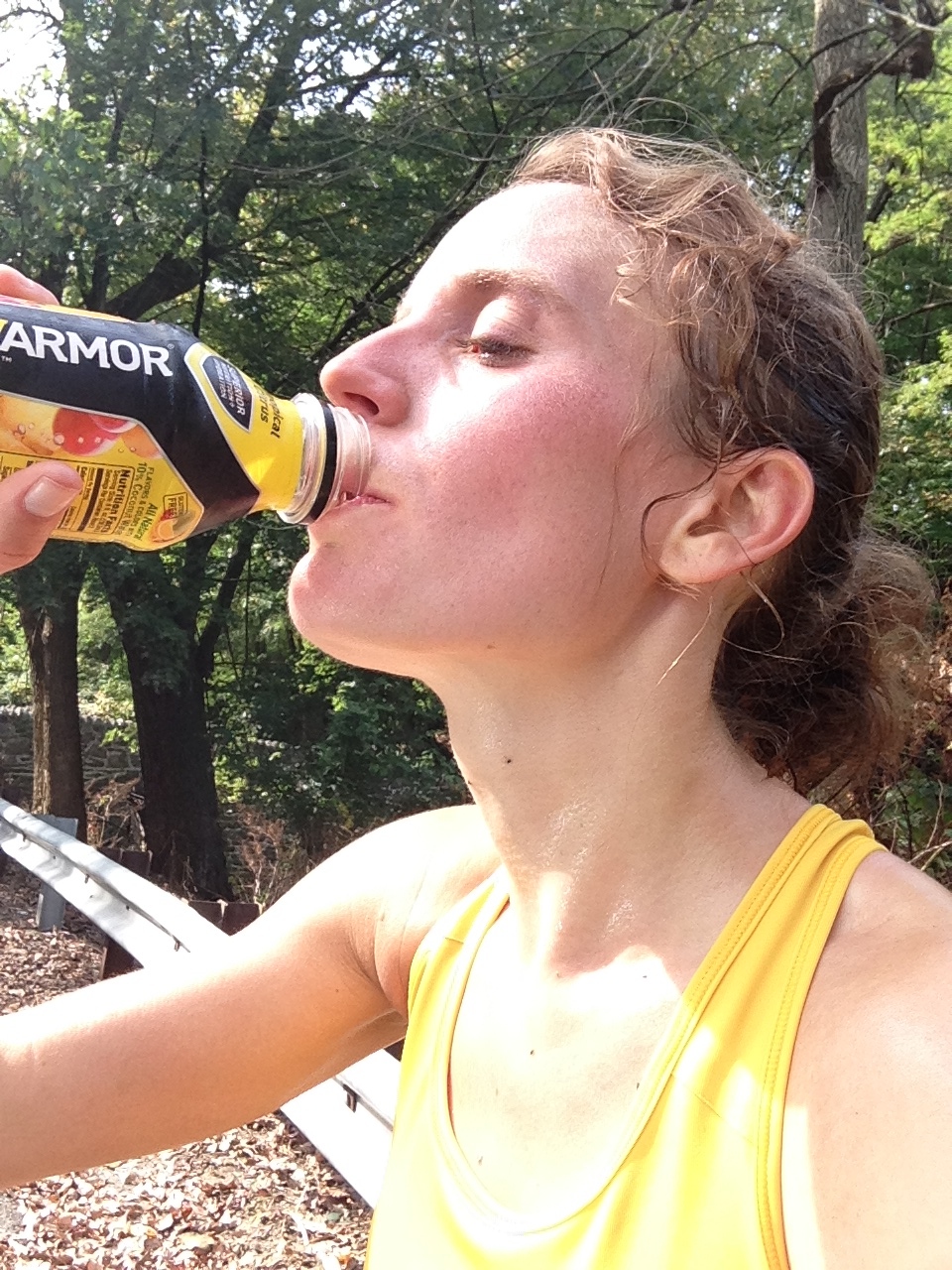 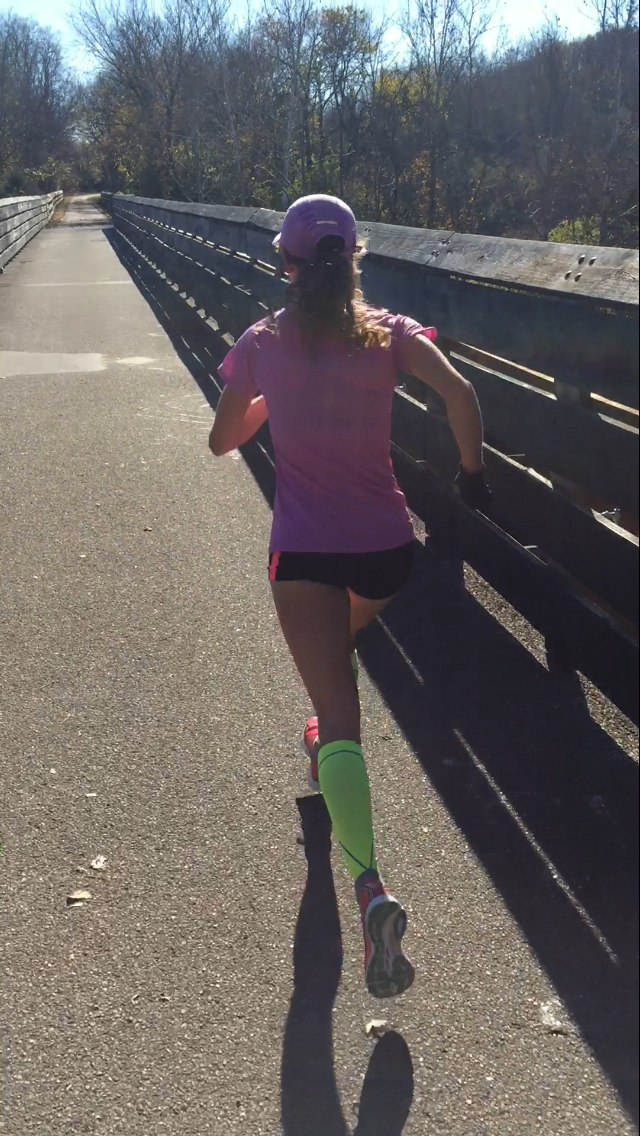 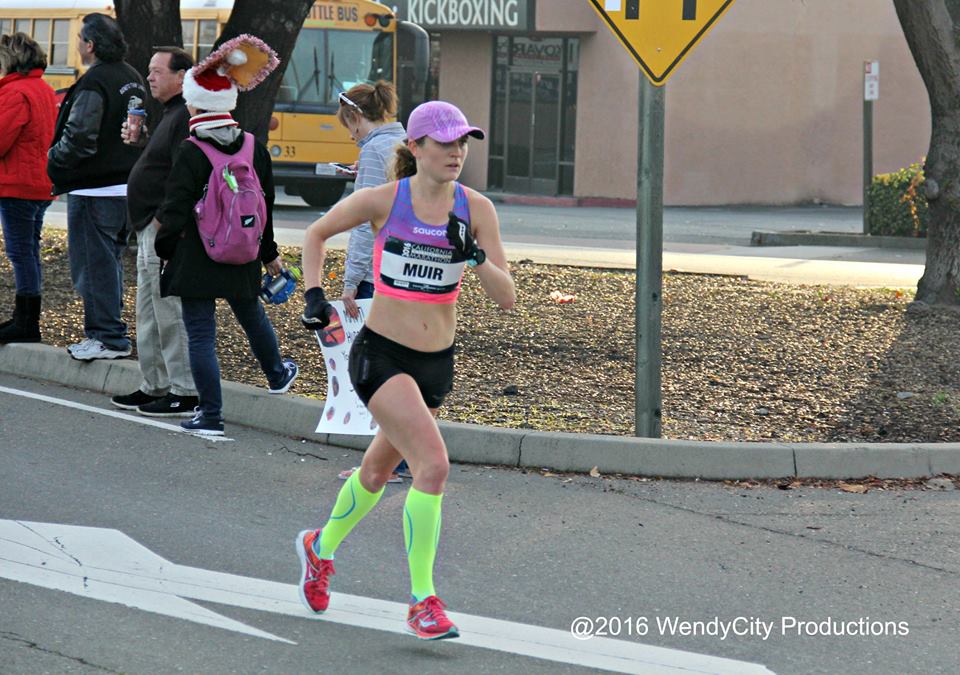