5 Tips to Get Over Sickness Before Race Day

Does this sound familiar?

It’s race week, not only are taper crazies making you paranoid, but you have that sinking feeling in your stomach:

Getting sick during marathon taper is not ideal.

Running with a cold is never fun, and any distance is going to be tough, but what about racing while sick?

Is it even worth trying?

But it wasn’t easy; I was sick during race week, and honestly, racing with a cold was out of the question just a few days before.

I knew deep down I wasn’t right, but I was scared of actually saying “I’m sick!” or even bringing it up too much. It can feel like talking about it can sometimes make it worse as you are reaffirming the sickness, and encouraging more negative thoughts to creep in.

That being said, once I realized I was sick to the point where I might not be able to race, Steve and I took some drastic measures to make sure I was able to give my body the absolute best opportunity to race.

Taking time off before the race because you are sick is not going to do you any harm, think of it as tapering, and if you keep running when sick, fighting the cold is the extra work your body is doing to get you ready.

That means skipping meetups with people you may have planned, not walking around for hours, and sleeping as much as possible. It may not be fun, but if your race means that much to you, you will do it.

Today I wanted to share the ways I helped my body bounce back in time for the race. Running with a cold never enjoyable, and if you find yourself a week away from marathon and you are full of cold this may help.

As I mentioned, a lot of it is trusting yourself to know if you are ready, but this post is for if you have a cold before marathon or half marathon.

What you can do to give yourself the best shot if you are getting sick before a race?

So here are my 5 tips if you got a cold before race day, to help your body fight it off quicker: 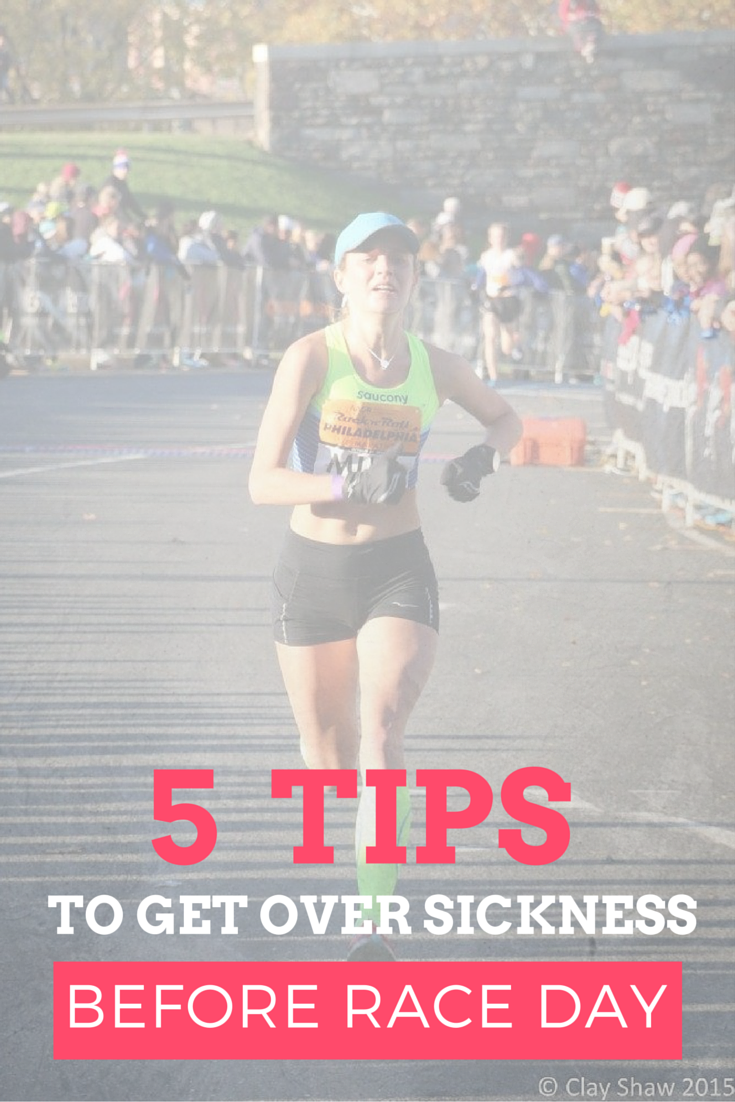 If you are sick during race week, resting becomes your priority

This is not going to be a surprise for anyone, and in some ways it seems silly even mentioning it, as it is so obvious, but it is one we often ignore.

I am generally a bad sleeper, but the week of the race I slept.

Yes, part of that might have been because of the Nyquil some nights…..okay, probably a lot of it was because of that, but the more sleep you can get, the better, and if the drugs helped to knock out my racing mind as I try to sleep, that was a sacrifice worth taking.

Try to add at least an hour to your usual sleep routine when you are sick, and if possible, take naps throughout the day, the more the better during this time.

I would be in bed by 8:30pm or latest 9 during that week, and one day I even slept in till 7:30, which is absolutely unheard of for me.

There is another element of rest though.

It is not just about sleeping, but trying to move as little as possible, trying to give your body the opportunity to dedicate all the energy it can to helping you get better.

On my race week workout, I backed off the pace to make sure I was not putting my body under any more stress than was necessary to keep me from feeling stale.

I also canceled all cross training for the week.

My strength coach Drew had me try some exercises, but I knew in my heart it wasn’t right, and he could see it too, so we ended up doing breathing exercises on the floor, then I went home!

Rest as much as you can, in every way. If that means taking a taxi for a half mile travel, do it!

By the way, being sick race week is the ideal time to work on your problem solving skills as a runner. Yes, this bad thing has happened, and you may feel it is just bad luck, that you are getting your bad luck out of the way, but you will go into the race most confident if you are prepared for other things that could go wrong too. This is not pesimissim, but actually helping you to be MORE confident as you know whatever comes your way, you have a plan to figure it out.

Pop your email in the box below, and I will send you a worksheet I have my athletes use in the build up to race day. It will help with your preparation, and help you see this sickness in a different light

You won’t gain fitness race week, but you could sabotage yourself

You are not going to gain any fitness race week.

All you are doing race week is trying not to put yourself in a damaging situation.

Therefore, if you are feeling really bad, and the idea of running makes you feel like you want to lie on the floor, then don’t run!

I actually did get a run in each day when I was sick, but I kept my pace so slow that even being sick, it didn’t feel hard at all.

As gross as this is, I liked the opportunity to get some of the junk out of my nose, and running clears your nose enough for you to really be able to blow it out (I think we know what I am talking about).

It also gave me the time to feel somewhat normal for a little while.

That being said, I ran less than I had scheduled, and I was prepared not to run, especially on the day I felt worst.

I had planned on running in the morning, but I felt so exhausted, I decided that running was not a good idea so took a long nap instead. Later that day I felt much better, and I decided to give it a try, and I felt surprisingly okay.

Long story short, unfortunately with your runs it comes down to trusting your gut. That means trying to  figure out whether to race or not if you are sick, and using your common sense to know when to run.

This is going to differ for every person, and on how far along with the sickness you are.

I wish I could give you the answer for you, but the best thing you can do, is sit down, close your eyes in a quiet room, and listen to your instinct.

Best medicines for getting rid of a cold quicker

As much as I wish I could say I only recovered with rest alone, I definitely had some outside assistance.

As soon as I felt the cold coming on, I started taking Zicam Ultra Cold Remedy

, and I would recommend it to anyone.

It completely removed the symptoms, and helped me to almost forget I had a cold (other than the lack of energy).  It works better than anything I have ever tried before. Try it!

to help me sleep at night. I would rather not take it, but it really does work well to knock you out, and as we have already mentioned, rest and sleep is the best way to encourage recovery.

Emergen-C  packets were also taken a few times during the first few days, as well as consuming other vitamin C rich foods

I was prescribed some antibiotics, but I actually decided not to take them after reading about some side effects for runners. If you are planning on taking them, make sure you talk to your doctor about how they might affect you. I was not prepared to take the risk.

Herbal remedies can speed up recovery from a cold

In my constant google searching, I read about Golden Milk, which was a drink that had anti-inflammatory properties to help a cold.

It made me feel a lot better, and I actually enjoyed it enough to where I think I might drink it a few times a week. 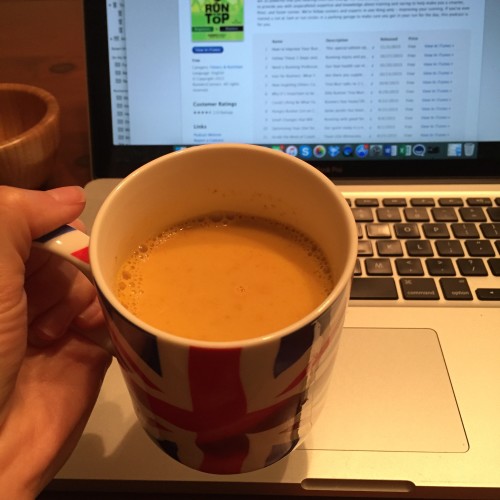 The ginger and turmeric are great for reducing inflammation, and the honey coats your throat so it slides down easily.

You should also stay away from Dairy while sick, so almond milk was a better option (and almond milk is high in Vitamin E which also helps with recovery!).

I was having 4-6 cups per day of different herbal teas.

Apologies for the graphic detail, but if you want to get better (which if you are reading this post, you are probably pretty desperate like I was!).

There is no nice way of saying this, but you need to get it out!

Blowing your nose (rubbing Vaseline around it if it gets sore), blowing snot rockets (sorry) while you are out on your runs, and coughing it out if you can.

The more you can get out, the less chance there is for it to run down towards your chest.

I did not take mucinex or anything, but I have heard of others doing that.

I just tried to clear it out of my body as much as I could, and it seemed to help.

And that my friends is it…..I think.

Part of me believes that I just lucked out….had I got the worst of the symptoms on Friday, I am not sure I would have made it, but the biggest thing for me was realizing the Friday prior that I felt run down.

I backed away from my plans, and stayed in all weekend to rest.

I think that saved me.

If you feel a little off, you probably are fighting something, and when you have a race coming, it is better to be safe than sorry.

Once again it comes down to listening to your body, and trusting your instincts.

I know not everyone can back away from plans the way I can (especially for those of you with kids), but if that means canceling on friends (which I had to do), they will understand, and probably thank you as you are not going to pass it to them!

Need someone to snap you out of it?

If you are sick right now, and freaking out as you read this, try not to panic! I know you have worked SO HARD for this race, but you will be okay. If you need some extra reassurance or someone to talk to, drop your email below, and I will reach out to you

It is not over, and I proved last week that you can race well being sick, especially if you follow my recommendations about how to know if you are ready to race.

Remember, either way, there will always be other races, but you only have one body, so make being healthy the number one priority, and you will get your chance, even if its not right now 🙂 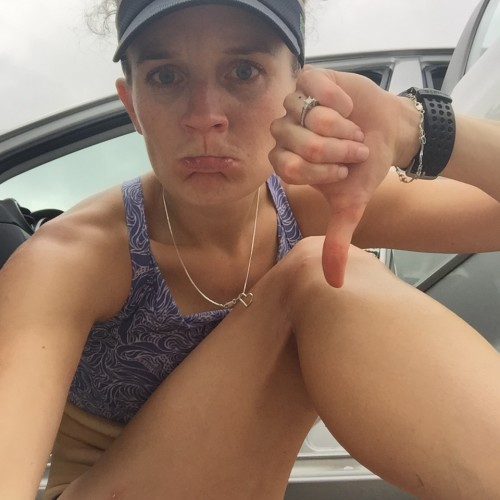 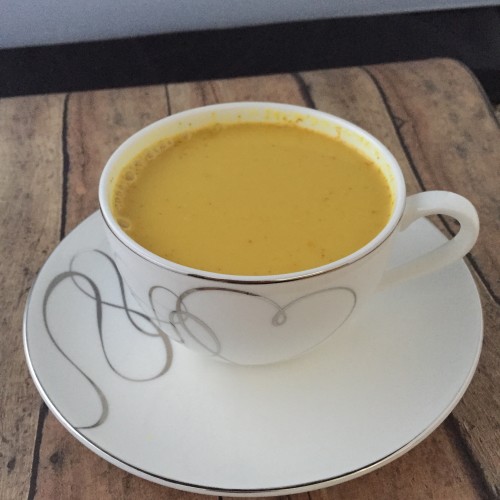 Drink Yourself Healthy with Golden Milk