If you had asked me a week ago if I could guess what I would have run at this race, I would have asked you if I even finished.

So bad that my strength coach Drew ended up making me lie on the floor of the gym doing breathing exercises to get myself to relax, before sending me home to go to bed. I was so exhausted, even making it up the stairs was a task.

It wasn’t like I had some serious sickness. It was just a head cold, but for some reason it hit me hard, really hard. I think it is because I am so highly strung and push myself too far most of the time, that when my body does get run down, it goes into shut down mode (as it knows thats the only way I will actually listen).

I considered not racing, and if the race was anywhere other than Philadelphia, there is a good chance I would have backed out and stayed in bed all weekend. Thankfully, Sarah was on hand to tell me that I WAS going to run, even if she had to call Steve to convince him (Steve had said if it went to my chest he was not going to let me race).

It was not the time we had originally hoped I would run….okay, thats a lie, we had no time goal, but we both admitted afterwards that we had hoped I would run in the 1:12 as a best case scenario. However, considering the week I had, it was about the best race I could have hoped for, and I am very proud to have the time next to my name.

I ran 1:13:21, a 1 minute and 8 second PR since finishing 3rd at the Brooklyn Half in 2014, but just as important, I got to redeem myself in my city after the disaster that was the Philadelphia Marathon in 2013.

So let’s start from the beginning…..

At 4:30am, after a restless night of sleep, I had my bagel and banana, along with my hot drink to get the digestive system working. I had a feeling it was going to be a good day when I started off the day with this quote on the teabag string of my Good Earth Chai Tea 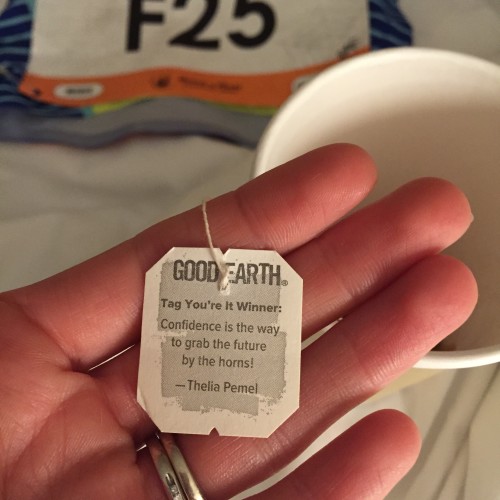 I think I will! Thank you 🙂 Right now I am reading The Alchemist, and this was a good omen 😉

After a bit of a rushed warm up as the bus got us to the elite area later than I would have liked, before I knew it, we were standing on the start line. We did not really get a chance to do any strides, but I guess this was one of those situations I am thankful that I am a bit of a slacker when it comes to pre-workout strides.

Suddenly the gun was off, and there were people zipping by all around me.

I don’t really know how much detail to go into about this race. It was tougher than I thought it was going to be, and definitely tougher than the Army 10 miler a few weeks ago.

In the Army race I felt strong until a few miles to go, but with this one I was working hard even from a few miles in.

However, most women went out faster than I did, and I caught and passed a lot of people. I had absolutely no idea what pace I was running. I did not look at my watch from start to finish (and the only clock there was on the course was at the 1 mile mark, and it said 5:02 when I went through…..which was 30 seconds off!!!!). Not knowing where I was at was scary, but at the same time good, as I knew I would freak out either way. 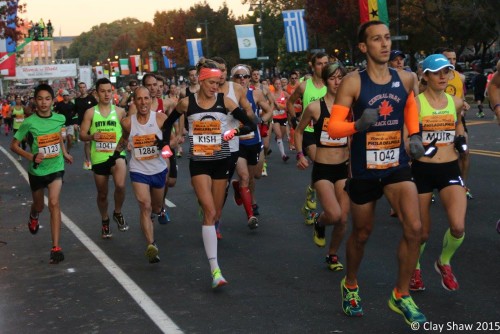 I ended up running with Dot McMahan for a lot of the race, we went back and forth a lot, but spent the last 4 miles working together to run people down in front of us.

It was the first time I think I have ever worked with another runner to move up the field. I really liked it, and hopefully I can find others to do that with in the future. It really helps to make sure you do not back off the pace.

I am sure most of you do not want to read a play by play, so I will just say that I loved being able to run in my city. It made my heart so happy to be back in Philly, and it was so nice knowing that I knew every turn, every tangent (although I still ran over!), and I could soak in the beautiful course that I know so well.

It made it easier to enjoy, even though I was hurting early on.

Steve thinks that part of the reason that I was working hard is that the sickness threw my internal pace clock off a little, and I have to agree, but at the end of the day, I ran the best I could, and I have no regrets from the race…..other than the last .1 of a mile……….

I thought the race finished in the same spot as the marathon, so once I made it up the final hill, I thought I still had about 300 to go…..in fact the finish line was right at the top, so I didn’t get to use my speed I have been working so hard on, but looking back, what we were working on was my efficiency, my overall speed, and we proved that has improved, SIGNIFICANTLY!

I have worked so hard over the past year to get my form right. It was almost a year ago that we went to UVA Speed Clinic and first started to make the changes, and I have spent countless hours working on it since.

Last Saturday, all those hours were made worthwhile. A 1:13 is definitely a jump forward onto the next level. It will open up some doors for me, and points towards an exciting marathon in my future.

Rock ‘n’ Roll Philadelphia Half Marathon was a great race, and the field of elites was really deep! I was 14th female, but that was great to actually see where I stand in amongst these women I have seen results for over and over (the winner ran 1:09).

There are so many people I want to thank for helping me run so well last weekend, and I would go on forever if I did list everyone who has helped me, but let me just say that every one of you who has supported, listened to me ramble on about my form, or how tired I am, or who has given me even 1 minute of your time, YOU are part of the reason I ran so well.

Without the love and support of all those people around me, who love and care about me, I would never be as happy with my life, and if I am happy, I run better as I have that balance, so thank you!

I would like to thank my coaches; my strength coach Drew Watts for helping me take those next steps in my form changes. You constantly amaze me with your care and attention to improving my form, and by you giving me my power back, I was able to reach that next level.

And I of course want to give a special thank you to my amazing husband. For everything you do. For dealing with my meltdowns, for giving yourself butt sores cycling alongside me in my workouts and long runs, for taking the time to plan out my schedule when you are already working two jobs with your team, for not murdering me in the middle of the night when I cry when I can’t sleep, or try to ask you questions about my training as we try to sleep. Steve, you are my husband till death do us part, but you go so far and beyond that. I don’t know how you put up with me sometimes, but I hope it made it worth it.

Finally, my sponsors; Saucony for giving me everything a runner needs to train well, EnduroPacks for keeping me recovered, Sizzlefish for giving me my omegas that are so important, Nuttzo for the endless tubs of love that I devoured during this last training cycle, Twin labs to go in my recovery smoothies, and Primal Sport Mud for your endless support! I am lucky to have such great companies behind me!

Oh, and in case you were wondering…..here is what I refueled with after the race 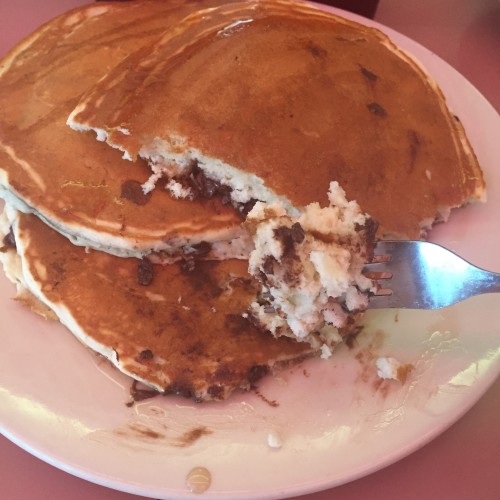 Well, I think I am going to find 1-2 more race before I take my time off. Right now it is looking like I will HAVE to come back to Philly for the Rothman 8k (damn what a burden :P) on the 21st Nov, and then will likely do a Turkey Trot around here.

In case you were wondering why I did not just take my time off now….

We leave for our honeymoon on December 4th (and boooooyyy do I have some special guest posts for you!!!), and so I wanted to take my time off for that.

Either way I will keep you posted.

Thanks for all the love, and congrats to everyone who raced last weekend!

Oh, and I am now officially under the qualification standard to be considered for the world half marathon championships in 2016 to run for Great Britain! Right now I am ranked 9th, but many of the people ahead of me may be busy preparing for the Olympics, so I am really hoping I get the opportunity to compete for them in March, that would be a dream come true!

Have you ever raced well off being sick? 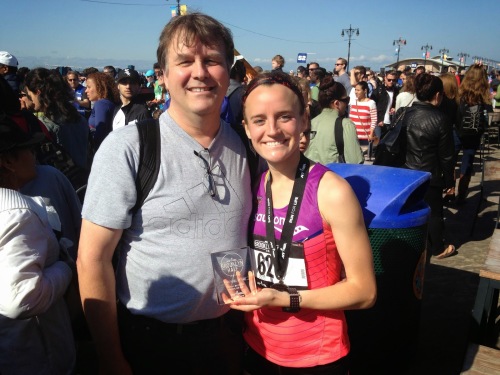 3rd Place Finish at the Brooklyn Half Marathon 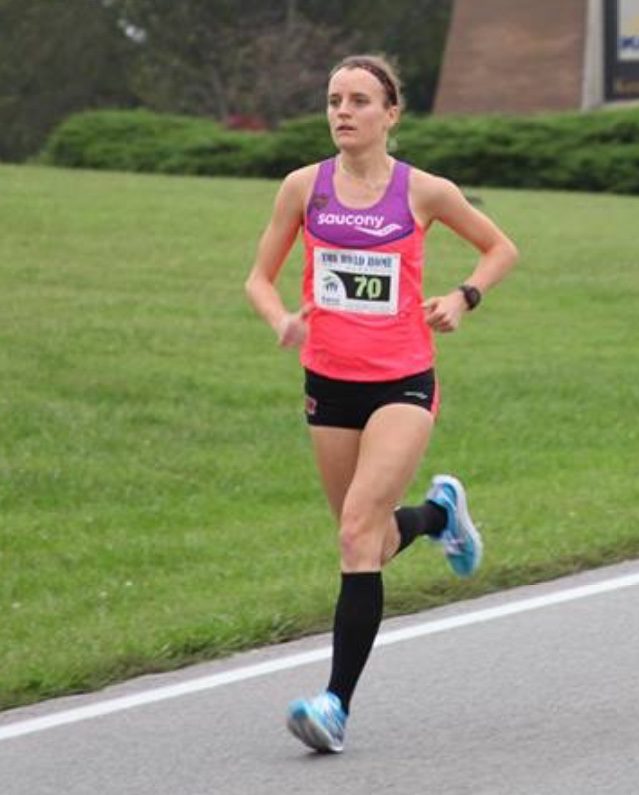 The Road Half Marathon Recap 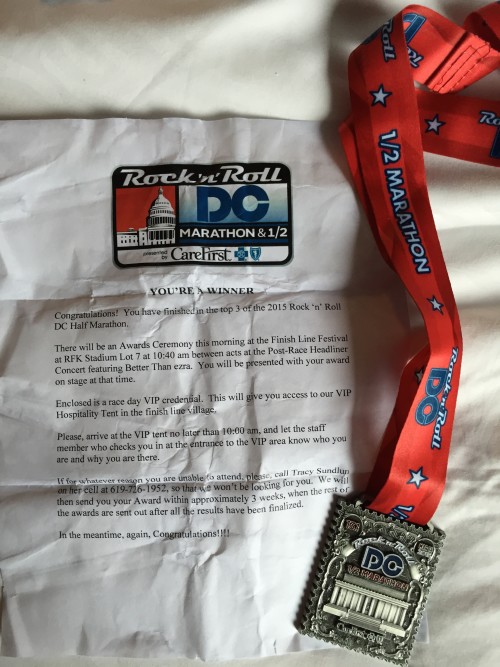