My Running Journey: The Beginning

Let me start off by talking about where I had come from, and how I had dreamed of the day I would get to represent Great Britain, but I ended up on a tangent, and I apologize for that.

However, today I thought I would share my story, from the first time I discovered my competitiveness, as many do not know it, and quite a few people have asked lately.

I think I always knew I was competitive.

I always wanted to be the best at what I was doing at that moment, and would sulk when I did not win. The earliest example of this I can think of was racing the two little boys (Chris and Ben) who were around my age down the hill on our trike bikes when I was around 3 years old (and living in Bloomington, IN). 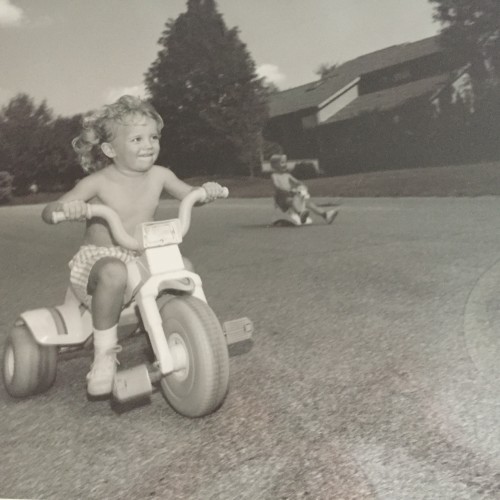 Apologies for the nakedness.

I am sure my parents saw the competitiveness at many other moments, and I loved playing netball in Primary School. For the Americans reading….netball is like basketball, but there is no dribbling, no backboard, and the nets are smaller (oh, and it is for girls!). 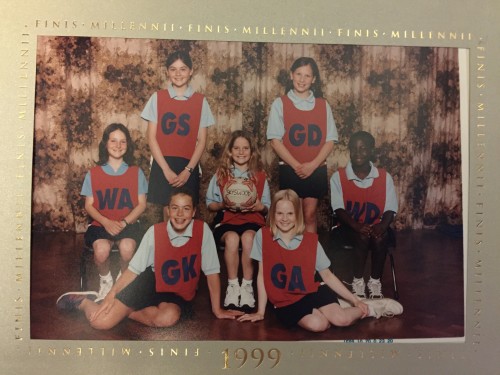 However, the next time it really was brought to life was around 10 years old when I joined the CoSta swimming club at the Westminster Lodge Pool in St Albans (who is now sponsoring me, oh how life takes interesting turns!)

I remember the training being very intense.

Probably nowhere even close to the level of intensity I push myself through now, but at the time, I really struggled, and HATED the pushing myself part. I am sure there were moments I enjoyed it, and I am incredibly thankful that CoSta was there (and still is), and I did it, because what does lots of swimming do?

Develop your lungs into powerful, efficient machines, and what do powerful and efficient lungs help you to do?

But, I remember being at swimming practice, and being so exhausted, that I would say I needed to use the bathroom just so I could go and take a rest. It was so hard, BUT that competitiveness was there. Every time I was in the water, I was trying to overtake people.

I think that is why I struggled so much, because like now, I knew that when I was in the pool, when I was going, there was no going back, I was gonna go all out with everything I had, even if it left me exhausted.

I do not think I was particularly good, and I never made it to the fast lanes, but I know that whoever was in my lane, I was always trying to be first. I remember that clearly.

Unfortunately, the stroke I ended up being best at was breaststroke, I loved it, but not exactly the glamour stroke is it?

I do remember competing in various swimming meets, and sadly, most of what I remember was finishing near the back, being one of the slowest swimmers, BUT I do remember the thrill of competing, how hard I tried, and the desire to be better.

Without that, I am not sure whether I would have ended up getting a taste for running.

Many of you know that I initially did not like running, and hid in the bathrooms of my school when they were doing the tryout for the team, BUT of course I still had cross country PE classes, and even though I disliked it as much as everyone else, somehow I emerged near the front, and was soon recruited to the cross country team for my school.

My friends say they always remember me passing them, doing laps around their laps, flying by them, but unfortunately, I actually do not really remember that at all.

I do remember the races though, at various schools around St Albans, after school, once a week, the cross country runners would compete.

One of my favorite parts of this, was getting to spend more time with one of my best friends, Lianne (who is still a very close friend today!). Although this was about the running, at this point in time for me, I was more about the social side of things.

I did enjoy the race itself though. I was not the best on the team, although I had a desire to be, especially as the girl in front of me was not exactly committed. I vowed to do what I could to be the best I could.

I had my eyes on being number one, and I was not going to stop till I got there. Bearing in mind I was probably 13 years old….not exactly developed enough to be chasing gold medals. At this time I had no thoughts about the future, all I wanted was to be the best on the team. But I guess the same principles applied; think about what you want the most, and work towards it no matter what it takes.

My mum remembers me telling her that I liked that I found something I felt good at, and we all know that we tend to enjoy things that we feel we can excel in.

Soon enough, I did move to the front of the team, and I got a taste for success. I not only worked my way to the front of my team, but I started to close in on the leaders of the city of St Albans. At this point I was still only really doing the cross country PE lessons 1-2 times a week, and maybe one other cross country practice after school…..which involved my PE teachers telling me to go run a few laps of the field. Not exactly structured training!

I also was on the Field Hockey and Tennis teams, but I think that was mostly because I was good at running around, not because I was actually skilled!

One of the teachers, Joy Allen, recommended that I joined a running club, as that is how most of the running is handled in the UK. She had someone in mind, and sent me to the next town along, Welwyn Garden City, to meet Brad Plummer at the Verlea running club.

Brad had a great sense of humor and said he could see something in me straight away. He could tell that I was going to be good, and said I was going to someday run really fast.

I trained with 4-5 other runners twice a week in the evenings on the Gosling track or at one of the girls houses (who happened to live on the Arsenal training ground- yes, THAT Arsenal!!!).

In England, most people run after work, so training would be at 6:30pm. We would do some track workouts, like 8×200 or some kind of ladder. Brad also had some creative workouts we would do, where we would work in teams, one person ran around a field, while the other walked across the middle to recover, then you would switch.

Brad always kept it interesting, and I enjoyed training with the group. I began to race for my club, and I did pretty well. In the days I did not see the group, I would run from home.

At first my parents would not allow me to run the streets on my own in the dark, so my dad would strategically take a walk where he could send me off around a looped road, while he walked across the middle and met me at the other end of that road. I am not sure how far we would go, probably not more than a few miles, but I enjoyed the challenge, and once I could run on my own, I loved the adrenaline rush of running in the dark.

You know I am always preaching about starting off slower, and getting stronger as the race goes on? Well, I have always done this, as much as my coach told me to get nearer the front, I had already decided, even at that young age, that I wanted to come from the back and pass people who went off too fast!

I would be running amongst other mid teens, 30 year olds, 60 year old runners. Everyone was out there together, vying for a spot on the Herts team. Your county is kind of like your state, just on a smaller scale as the UK is so small! It was just as prestigious though.

The first time I made it on the team, I had a horrible race and I could not believe that white piece of paper inviting me to represent Herts in a national championship had been given to me. I finished 8th (they take 8), and I felt very proud.

That first national championship I was sick with worry. So incredibly nervous, not helped by the fact I was well into listening to motivational songs and Eminem’s Lose Yourself was what I chose to listen to on the bus on the way there- telling an already nervous young teen that they better not waste the “one chance” they had was not exactly the smartest move, but it was what I thought I should be doing, so I did!

That race was a disaster. I finished 222nd, out of probably 250, and I felt embarrassed. I had completely let the “pressure” get to me, and I made up some injury that I didn’t have for the reason why I didn’t finish higher up.

Looking back, two things about that story are funny now: how poorly I handled the pressure and choked, especially when you compare it to my race at the World Half Marathon.

I can be relied on to perform when it matters, but obviously that skill had not been developed at that time.

Secondly, the frustration at not doing my best. I was annoyed at myself for not pushing myself and for giving up mentally. Nothing has changed there!

I vowed to be better.

When did your training journey begin?