As I sit in the car, on our 8 hour drive back to Lexington, I have plenty of time to reflect on my race this morning. Sitting with a blank page in front of me, I asked Steve where to start. He said “that you spent time with this years Boston Marathon champion”. Yes. That is a good starting point, and a good summary as to what my experience was like. I will go more into that later.

Last Thursday, Steve and I drove to Davenport, Iowa (checking another state off my list-woohoo!). We did not know what to expect of Davenport. Neither of us had particularly high expectations of what the town would have to offer, but one thing we did know already; this town LOVES Bix weekend.

I had heard of Bix before, and any of my elite friends who asked what my next race was gave me a reaction that made it seem like this terrifying race. It definitely has the reputation of being the hilliest course that elites race. It was a tough course. I knew that. I heard it was always humid. I knew that. But what I did not know was that I would get to know some of the best runners in the world, and I would LOVE my Bix experience.

I shared a few weeks ago, that I was not feeling confident about where my fitness was at. Honestly, we didnt really have much of an idea, so I really wasnt sure what to except from this race, but thankfully that took the pressure off.

We took the course tour the day before the race with the other elites, and it was every bit as hilly as I had heard. Not only was there a giant uphill to start the race, but it kept rolling up and down, and those hills were not just gradual hills, but those kind of hills you have to put your head down and grind. Of course that means if you have to essentially tiptoe up the hills, it means you have to absolutely let yourself fall on the downhills. That was the part that scared me the most. Some of the downhills were the kind of hills where your natural reaction is to lean back, but you just have to let your arms flail, and hope you dont fall down.

Before I get more into the race, lets backtrack a little.

Bix always has a high quality field, and this year was no exception. The elite field was full of lots of Kenyan, Ethiopian, and Japanese athletes. I rounded out this international field to represent Great Britain. We were housed in the student apartments, and I felt extremely welcomed by the elite athlete staff, and within an hour of being there, I was sitting with a group of Kenyan runners, as they asked me about my life in Kentucky and my wedding. They were so lovely, that I forgot I had told Steve I would be back in a minute (45 minutes later he came out to find me!).

When Steve and I went back to the room later on, the names they had told me clicked as to who they were; Alli (Tulmook-Bolton, Caroline Rotich (Boston winner this year), Diane Nikuri, and Isiah Samogei.

We also all attended the Bix Pre Party, where we sat with Jon Peterson (Team USA Minnesota), Pat Rizzo (one of my elite takeover bloggers), and famous race announcer Tony Reavis. It was great to be a part of the event, and moments like this are what make it fun to be an elite. Although there was a scary moment when the elite coordinator, John Tope went through and introduced all the elite runners (with our accomplishments) starting with me; standing up and waving to a room of 200! Eeek!

After the technical meeting, we were “free” for the evening, and Steve and I went for a nice dinner downtown.

At 4:30am the next morning, Steve nudges me asking what time I was getting up. I jumped up thinking we had missed the alarm. When I said I had it set for 5, he said, “oh its 4:30”. Damnit Steve! Now I am awake! 😉 Just kidding, I did not mind, and got up 10 minutes later. I microwaved my oatmeal with milk, and had my Tea.

At 6:15 we were to be down in the elite lounge to be ready to leave. We ended up sitting there till about 6:40, I sat again with my friends from yesterday, and we chit chatted for a while. I learned about “Kenyan time”, which explained why were told to be there so early!! Eventually we loaded the vans and headed for the elite warm up area, which was thankfully right next to the start line. 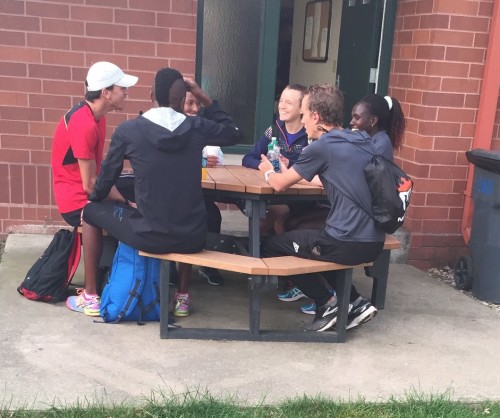 Before I knew it, I was standing on the start line, looking up at this giant hill before me standing within a meter of Meb. He shook a few of our hands, wished us luck, and we were off.

Steve and I had agreed that the first hill I would take at “what feels like” tempo pace. This meant that people were sprinting past me in every direction, but it meant that when I crested the hill, I was barely breathing, and everyone around me was practically hyperventilating. I knew then, that I had done the hill right, and I began my quest of kicking people down. I went through the first mile in about 6:00, and the second in 5:35 (mostly downhill). I was passing people, and feeling strong.

At the turnaround (just before halfway), we had agreed that I would use the next 2 miles to really chase as many people down as I could. I did just that, and passed quite a lot, and could see a Japanese woman out in front of me. I did not catch her, but I did pass 1-2 Kenyan runners (who actually dropped out). It was tough to breathe with the close to 100% humidity and high 70s temperature, but I didnt look at my watch once, and just focused on effort. 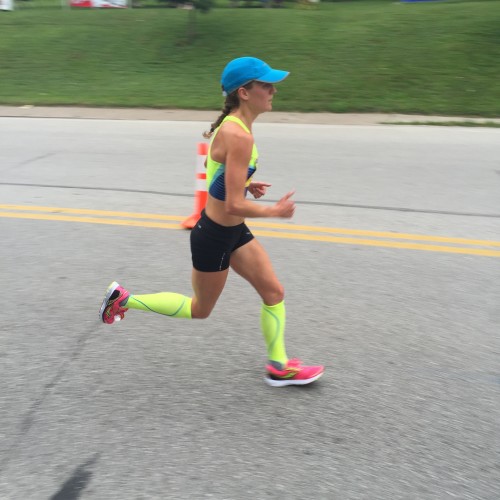 One thing we wanted to make sure we did right was to run the downhills correctly. Max from UVA Speed Clinic had once told me that he could guess I was awful at downhills, and since being shown how to run them correctly (Runners Connect has a helpful post on this), I have been working at it.

The finish of Bix was the place to prove this, and I used my “leaning over a cliff” technique to go as fast as I could down the final hill, and on the straightaway. My last mile was a 5:14. Not as fast as I would have hoped, but definitely a move in the right direction. 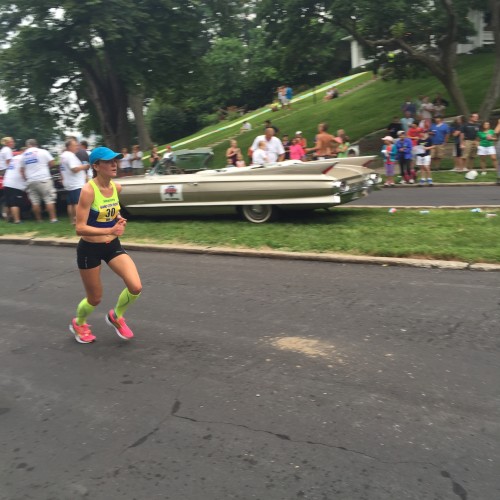 I finished 12th female, with an average chip pace of 5:46. As much as I would like to run faster than that for a 7 mile race, for the toughness of the course, and the conditions that morning, I was happy with it. Training since London Marathon has not been ideal (not for lack of trying!), and I ran tough.

I cooled down with Caroline, Ali, and Diane, (who finished 3rd, 4th, and 5th), Steve and I had another good chat with Rizzo while we waited for awards, and the vans took us back to our houses to shower. 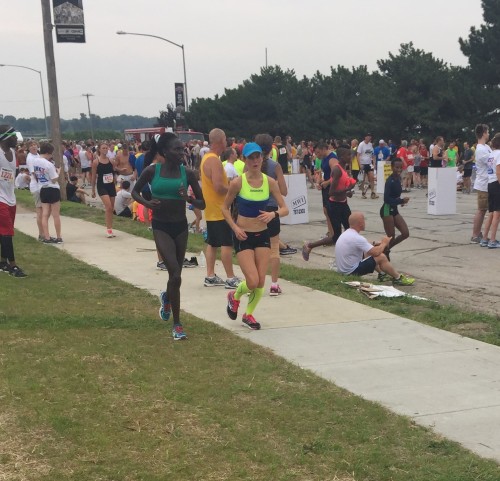 Long post aside. This was definitely a race worth doing. I really enjoy running races that are all about running tough and running smart. I feel like a big breakthrough is within my grasp, I just have to let it happen (and find a good race to do it).

Meb told me about how much the ElliptiGO will help with training, so I am even more confident in cross training now! 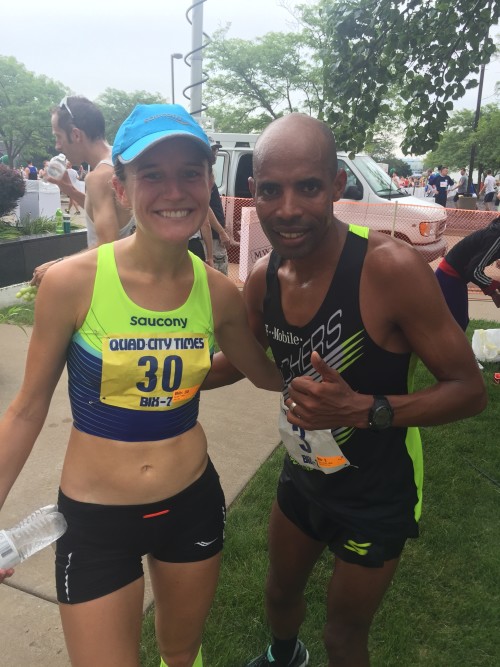 The next 3 weeks are going to be friends, family, and Steve focused. My parents arrive TODAY, and that begins my unplugging. As much as I feel guilty for backing down on my workouts, Strength Training (Drew made me promise I would take at least a week off), and my cross training, I have to keep reminding myself that this is my WEDDING! A once in a lifetime opportunity, and my fitness will still be waiting for me on the other side, especially if I still get my runs in!

So, this is all from me until August 24th. If you want to keep up to date with what I am up to, follow my Instagram, and follow our wedding festivities with #Run2Me2015 – Yes! We finally chose one!

I hope you all have a wonderful summer (or winter if you are on the other side of the world), and I will talk to you soon! Thanks for all the love and support!

No questions as I won’t be reading them 😉 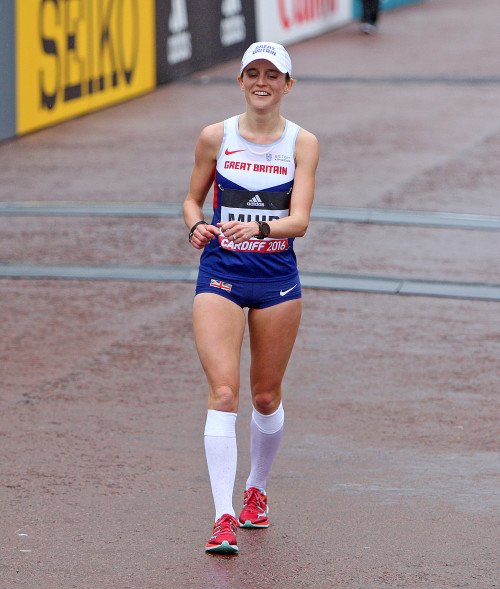 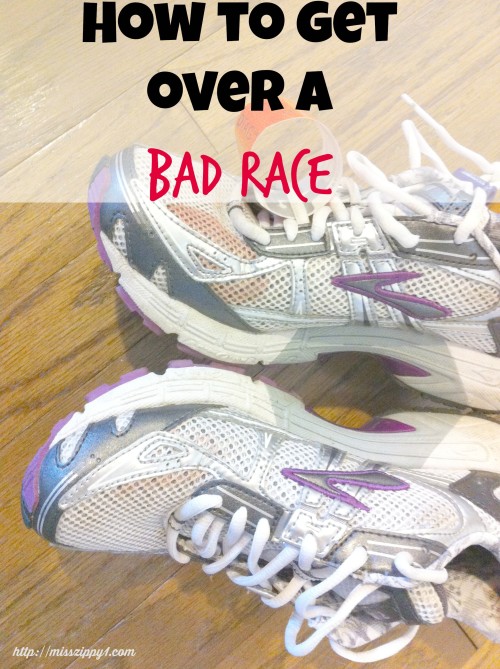 How to Get Over a Bad Race 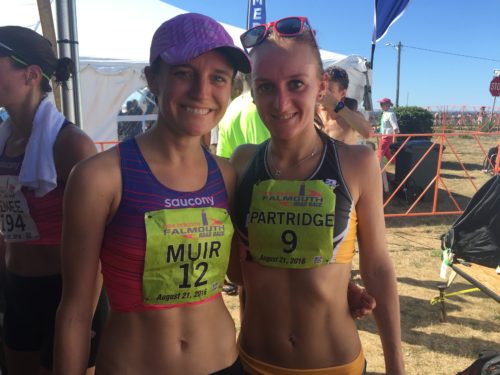