Back to Basics: Rocky Balboa Style

I have mentioned before, that Steve and I see ourselves as like the Rocky and Mickey of the running world.

We do not go to altitude, we do not work out on Alter G (or underwater) Treadmill, we do not use all kinds of fancy machines in the gym.

Honestly, I think that’s why I struggled last season a little, because things felt a little too manicured, a little too perfect, and I like coming up against things to feel like I am the rocky of the running world.

I pride myself on being tough, being gritty, and getting out there, doing it in the worst of conditions.

Granted, I have not yet run a marathon in bad conditions, so one day I will find out what I am really made of, and for now, I give serious kudos to any of you who complete races in bad weather, as marathons are absolutely exhausting as they are, without adding another element….literally!

For this season, as we are still not 100% sure which race I am doing (although should know within the next week), but Steve said that even though the races are months apart, it doesn’t really change how we are approaching these next few weeks.

We are going back to basics.

Much the same as last season, we are building the long run up, and we are still in the building stage with my mileage.

We believe that it is really important to not just jump up to high mileage after time off, or at least we can’t get away with that for me…..actually, we have never tried, but I just don’t want to take that risk 🙂

My first week back, I did somewhat of a pickup towards the end of the first week. I had done every run at easy pace, and was feeling back to normal after a rough first few days. I picked it up for about 6 miles, and ended up averaging around 6:25 for those 6 miles, not bad after time off 🙂

The following week we did a fartlek, to really shake the rust off, and see how recovered I actually was.

But this wasn’t a fartlek with distances or paces, this was just a run with 5 (minutes), 4, 3, 2, 1 of hard running with 1 minute in between. I did not stop my watch, and therefore had no idea what pace I was going, and I like it that way.

This week, we really went back to the start, and I literally ran up a mountain for 35 minutes in Morehead.

We realized we had not done this in two years, in favor of doing flat, fast workouts (which are of course, easy to compare….which does not work well for me anyway!!).

What did we do?

Morehead has a one lane road called Tower Road, which is 2 miles, straight uphill, on dirt/gravel.

Halfway up, there is a gate, and it is the furthest cars can go.

I started at the bottom, and Steve somewhat tracks me (taking a few pictures along the way). Once I got to the gate, I jumped in the car, and he drove down as fast as we could (safely!), which was about 3 minutes (which gave me a minute to jog around and get the jelly feeling out of my legs).

Up I went again.

But the third time, I didn’t stop at the gate, I went all the way to the top.

It was tough, and afterwards, I discovered I was averaging around 7:25 per mile (keep in mind my marathon race pace is under 6:00, and my half marathon pace is around 5:35!), so it was a killer hill, and I was breathing very very hard.

All I was focusing on was just putting one foot in front of the other, just keeping going to the next tree…and the next.

It was what we needed.

We have forgotten about hills these past few years. Putting them in here and there, but once upon a time, hills were my biggest strength, they were what gave me power and it was sad to me that we had just neglected them so much.

But not this time.

This time we are going back to basics, and if that mountain had been 5 miles instead of two, I probably would have just run straight up it all the way (with some kind of a break halfway I am sure).

We are building some hurting bombs, and we like it that way.

If you are struggling within your running, and just feeling a bit too controlled by the numbers, maybe this is something you can try too. You can even take a look at my Mental Training Podcast Series that includes 5+ hours of great content from experts about the mental aspect of running. Also, there is a mental training guide for runners from all of the interviews.

Find a hill, the biggest one you can find, and run up it.

No watch (okay, maybe a watch for overall time, but that’s it), no paces, no pressure.

If you can do what I did, and get a loved one to meet you at the top and drive you down, great. If not, then just run down the hill for random sections, and then run up. Change the amount of time you run uphill and down for however long you decide to go.

The shorter your hill is, the longer you probably should go for, because you will have more time to recover as you run down.

This will stop you looking at quantifiable results, it will stop you obsessing over how fit you are (or not), and instead, just have you focus on giving your best for that hill. As you have no idea what is coming next (or shouldn’t), you are just running, not thinking, but just doing it.

Give it a try, and let me know what you think 🙂

Build some hurtin’ bombs with me!

What workouts do you like to go back to over and over? 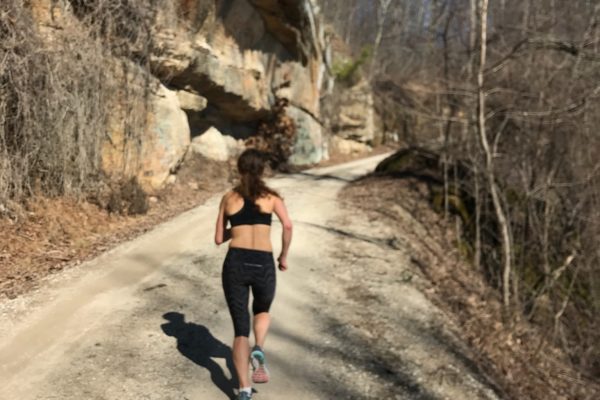