Running Can Stop Your Period. Just How Much Exercise Causes Amenorrhea?

UPDATE: Since writing this article, I have taken EVERYTHING I learned in my journey to get my period back, and wrote a book on the topic, so you have everything I know about amenorrhea in one place. This book is written for runners who have lost their period, but regardless of what sport you do, if you don’t get your period, Overcoming Amenorrhea: Get Your Period Back. Get Your Life Back will help.

Last week was a bit of a crazy, surreal week, that is putting it mildly! My story about stopping running and going through 9 years of no periods spread like wildfire, thanks to ESPN and Runners World.

ESPN- Why Tina Muir retired from running, at the peak of her career  Noootttt sure I would have used the word retired, but Amanda wrote a great article, getting everything I wanted out there (and she didn’t choose the title!)

Runners World- After 9 Years Without a Period, I’ve Stopped Running This one was then shared on Women’s Health Magazine. Although one thing I will say about this one, I can see how it would come across as me saying that ALL high mileage running is bad for women, it definitely isn’t, and in fact, I am VERY jealous of the women who can get away with it, especially those who got pregnant while training hard.

You guys are my readers, and you know that I have been saying all along I felt it was ME who was “broken”, and I wanted this to get out there for other women who were feeling the same way. A good friend mentioned to me (who had read my blog posts on here) that it could come across that I was saying every elite lost their period. As you know, they don’t I just have a very skittish body, I just wanted to clear that up 🙂

Thousands of people have reached out to me to say thanks for not making them feel so alone, which is exactly what I hoped for by sharing my story. I know how ashamed I felt that my body couldn’t function correctly, and knowing you are not the only one can take a huge weight off your shoulders.

However, it has also sparked a greater conversation about this topic, which is good, gets more awareness out there, but we are starting to get waaaaaaay above my head.

I am not an expert, and have never claimed to be, so today, I thought I would pass it over to the expert. The author of the book that convinced me to take that final step and remove running for a while.

Dr. Nicola Rinaldi of No Period. Now What?

Dr Nicola is the author and researcher of the book, and she thought it would be good to clear up any confusion, so once and for all I can have somewhere to send people to learn more. Especially if you are not having an issue like I am, you might not need to purchase the book, but you might want to learn more.

I am also talking to my male readers, I know many of you love the numbers and the science behind things, so you might find this kind of interesting. Besides, I bet you have a woman in your life who this might help. Actually, even though you might not have the loss of menses, men still definitely can have negative effects on health with the same issues, so don’t leave just yet!

The answer to all of these is yes, even if you are getting enough calories. So lets dive deeper into this, over to Dr Nic.

I am absolutely thrilled to have connected with Tina, a former elite runner who has made the decision to give up running for now to try to restore her menstrual cycles.

She has read our book “No Period. Now What?” and determined that the evidence we supplied on the detrimental effects of high intensity exercise on ones’ menstrual cycle was convincing enough that she was going to give it a try – instead of trying to qualify for the London and Gold Coast marathons she is taking a complete break from running to hopefully recover her cycles and get pregnant naturally in the not too distant future.

Her story has spread like wildfire – from her blog post, to an article in Runners World, to ESPN. I think it is fantastic that she is raising awareness of ‘athletic amenorrhea,’ ‘hypothalamic amenorrhea,’ ‘female athelete triad’ – whatever label you want to use.

How much exercise causes amenorrhea?

One frequent response has been for people to comment that running is not the problem, it’s the (under)eating.

However, in my experience, and that of hundreds of women I’ve helped recover from HA (many of whose stories are included in our book), that is just not true.

It is usually some combination of eating (which kind of goes along with weight and weight loss), exercise, and stress, that cause amenorrhea and *each* of those factors typically needs to be addressed in order for periods to return.

And it’s not just our experience, there is also a large body of medical/scientific literature to back up my assertions.

All of this and so much more is included in our book—it’s not just about detailing recommendations for recovery, it includes a comprehensive dissection of the science underlying hypothalamic amenorrhea as well as the basis for the recovery recommendations we make.

I am going to distill some of that science here to illustrate that in fact running (or other high intensity exercise) CAN play a (large for some) part in causation of amenorrhea.

How does stress cause amenorrhea?

Both of those hormones repress the hypothalamus. The repressed hypothalamus no longer secretes gonadotropin-releasing hormone (GnRH) at the rate required for maturation of an egg, which means no ovulation and no period.

Now for the evidence. Hill et al. (1) performed a study in which they examined cortisol and ACTH levels in men at varied activities levels: they took a pre-exercise sample, then had the subjects* rest or exercise at 40%, 60%, or 80% of VO2max.

A second sample was drawn immediately after completion of 30 minutes of exercise at the prescribed intensity level. The study was well controlled with subjects (12 exercise-trained men with VO2max > 90% for their age) performing each test separated by a minimum of 48 hours, at the same time of day, and the order of tests was different between subjects.

The researchers found that there were significant increases in both cortisol and ACTH – eh, let me show you the figures rather than throwing a bunch of numbers out. 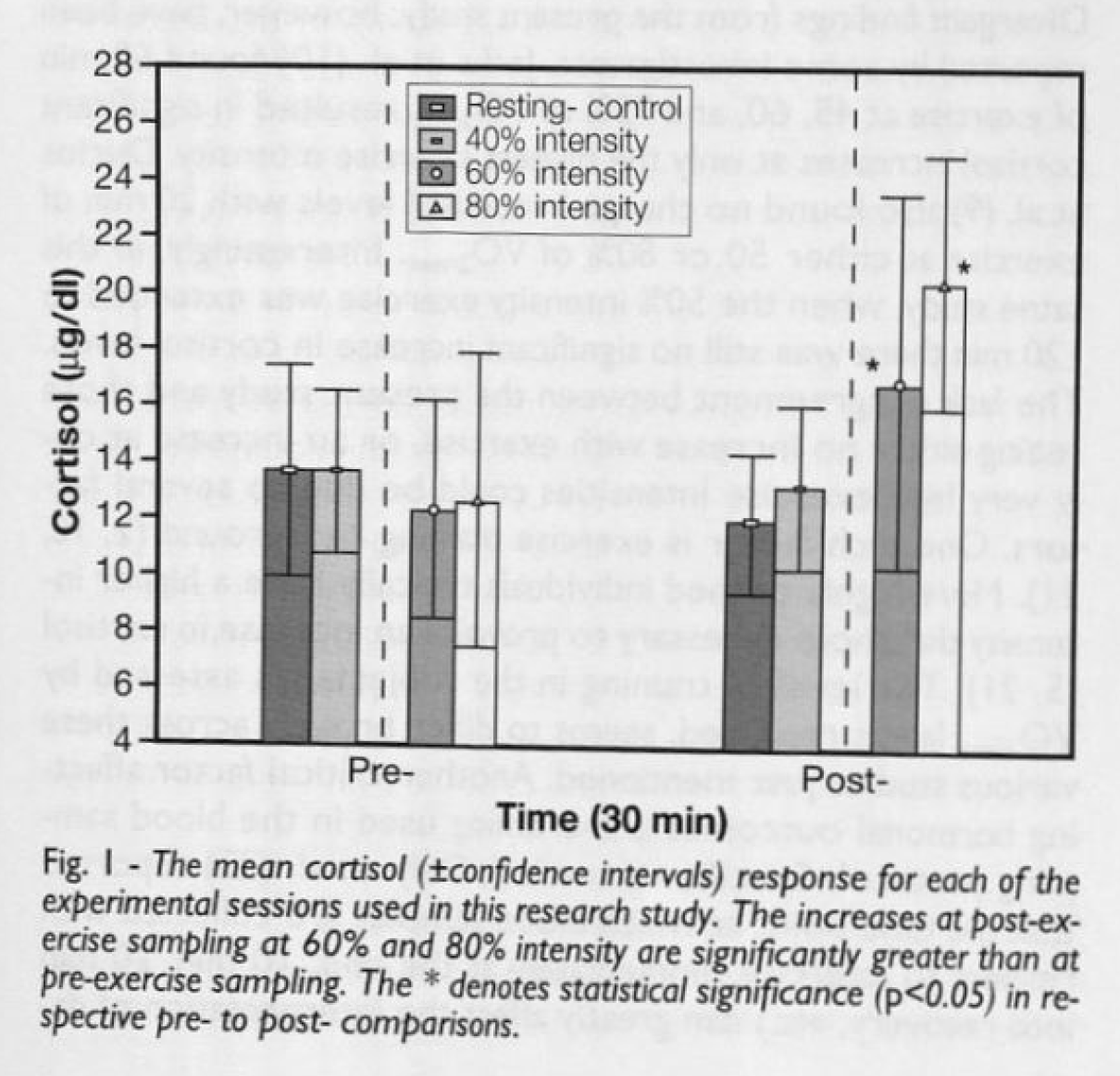 On the left side you see the pre-“exercise” cortisol levels, with both the average level and range fairly similar across all four parts of the experiment.

Statistical significance is shown with an asterisk.

A couple of key points here – yes, there were some people, exercising at 60% VO2max, who may not have had an increase in cortisol.

And that is partially why we harp on the idea that every person’s situation, path to amenorrhea, and recovery journey, is different.

But, when you take a look at that 80% VO2max, a place where an elite runner like Tina is exercising a fair bit of the time, pretty much every one of those people (note that these are trained athletes, not sedentary individuals) is experiencing this increase in cortisol.

Next, the ACTH results.

(I had to scan this article out of an actual PAPER journal as it wasn’t available online at the time I first read it!)

Here the mean and standard deviation are reported.

The only significant difference is after exercise at 80% VO2max (over a three-fold increase in mean), but there is a non-significant increase after 60% VO2max as well.

Both of these hormones (as well as others that are likewise increased by exercise) are sensed by the hypothalamus (2). In Dr. Mastorakos’ words, “The hypothalamic-pituitary-gonadal (reproductive) axis is inhibited at all levels by various components of the HPA axis (Figure 5).” 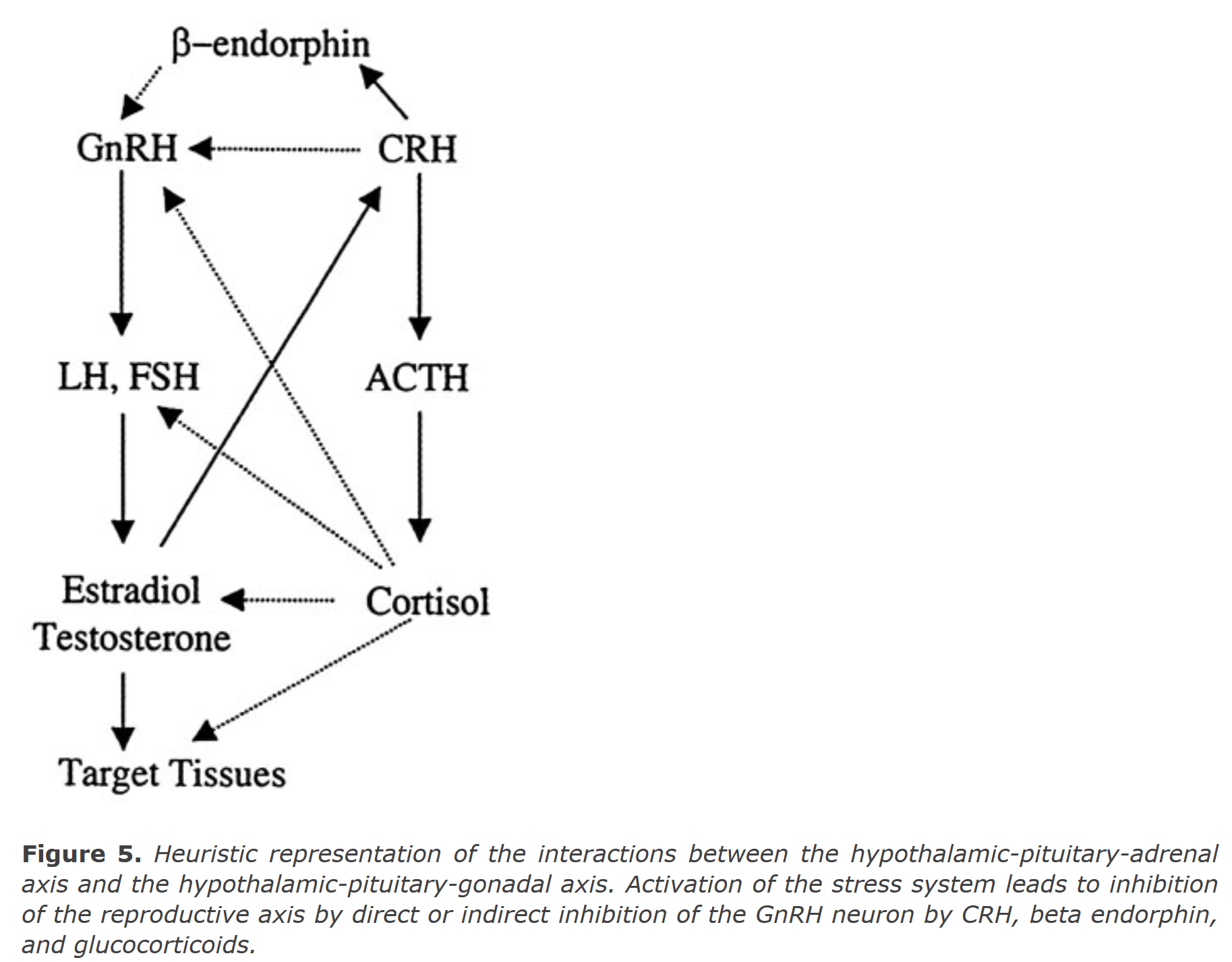 Not only does cortisol suppress the hypothalamus, but there are also mechanisms by which it suppresses the reproductive system at other levels.

And those endorphins that we all love from high intensity exercise… while they make us feel good and “less stressed” – in fact, those are also working to suppress our hypothalamus and reproductive system.

The explanation is quite complicated and Dr. Mastorakos’ article is very thorough in its explanation, so please read the section “3.2.5. Exercise and the reproductive system”  in his article.

In essence, these stress hormones are affecting the neurons in the hypothalamus that produce gonadotropin releasing hormone (GnRH) that in turn causes the pituitary to release FSH and LH (3).

Contrary to popular belief that estrogen is the dominant hormone in a female’s reproductive cycle, the cycle in fact begins with GnRH release from the hypothalamus leading to FSH release from the pituitary, which begins the egg growth and maturation process.

The growing egg then releases estradiol in greater quantities as it nears maturation, and when that estradiol reaches a threshold, a large release of LH from the pituitary triggers ovulation.

When the hypothalamus is repressed, the GnRH pulses are not sufficient to get that egg maturation process started, and therefore, no ovulation and no period.

Alright, I have to get to bed now but I do still have more to say on this topic (hence an entire chapter of my book devoted to exercise and its effects) so I will post again soon.

I will leave you with these two articles though, documenting menstrual dysfunction in runners and other athletes – and this is in women who are at a stable weight and bleeding regularly:

If you’re not convinced by now that in fact high intensity exercise CAN play a part in suppressing the reproductive system, please tell me why not? And what research are you basing your position on?

* I know, I know, the study was performed in men not women, like many others, unfortunately – but I think based on my experience with a vast majority of women I have worked with on restoring periods having to cut high intensity exercise out in order to recover missing menstrual cycles, the results are valid for women as well.

I am always this honest, real, raw. If this article speaks to you, I really believe we could be friends and I could help you as you get your health back. Drop your email below, and I will reach out to you

Phew! Well, there is the science, and this the one who convinced me to go “all in”, and I am glad I did, yes with the weight gain, yes with the cold turkey stopping of running. I feel in my heart it was the right thing to do, and I really would recommend purchasing Nic’s book if you are in this situation.

If you use her website to purchase it, rather than a commercial retailer, not only do you get the option to get the E-Book (which can be used for international readers), but you are helping support Nic, which actually will help her be able to focus on finding more research in the future! Thank you 🙂 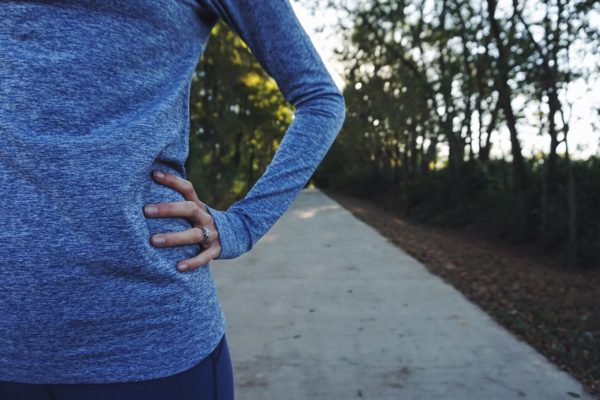 Time to Say Goodbye: When You Have Grown Apart From What You Love the Most 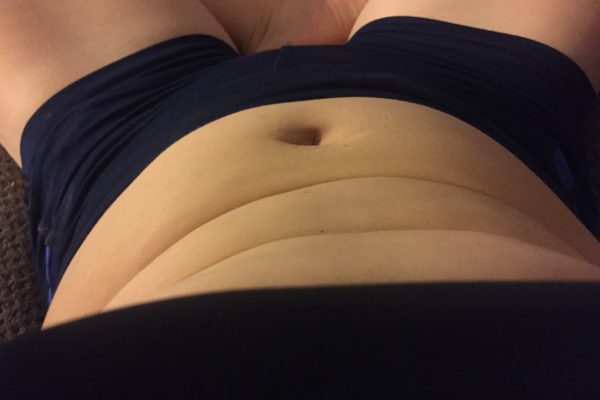 Athletic Amenorrhea: How Does Running Affect Your Period?