Stretching VS. Foam Rolling: Is There an Ideal Pre-exercise Warm-up?

Many of you LOVED my interview with the absolutely wonderful Tom Michaud. He always leaves me speechless with his knowledge and research on topics that runners are just so confused about.

Tom kindly offered to write up articles on a monthly basis to give us the summary of what he has found on topics that interest and fascinate us as runners, and I am very excited to share them with you.

I strongly encourage you to check out Tom’s website, for LOTS more helpful articles about topics I guarantee you have wondered about. It is also where you can access the Toe Pro Exercise Platform, I know many of you have already purchased one.

For today though, stretching and foam rolling, which is better for us BEFORE we run? Should we stretch before we run?

Twenty years ago, when a group of runners got together for a workout, a few would casually be stretching either their hamstrings or calves, but the stretches seemed pretty random and inconsistent.

It was almost as if the runners knew they were supposed to stretch, but didn’t really want to. Now, it’s not uncommon to see runners performing elaborate stretches with special straps and/or splayed out moving back and forth over oddly-shaped foam rollers.

The question is, are the new pre-exercise warm-ups actually worth the time and energy spent performing them?

And if so, should the stretches and/or foam rolling be performed before or after a workout?

In February of 2019, Smith et al. (1) evaluated the acute and long-term changes in calf flexibility following six weeks of static stretching, foam rolling, or combination of static stretching and foam rolling. At the end of the study, all three training groups had increased their calf flexibility by nearly 20%, with no differences between the three groups. The authors reference additional studies showing that foam rolling in particular can significantly increase range of motion, especially when it is performed more vigorously (2).

The important question is: does increasing your muscles’ range of motion reduce injury rates?

Without doubt, the overwhelming body of research says absolutely not (3,4).

The one exception to this is a study by Daniel Pereles (5), who had almost 3000 recreational runners assigned to either a stretch or non-stretching pre-run routine. Not surprisingly, there was no significant difference in injury rates between the runners who stretched versus the runners who didn’t stretch (which is typical of all studies on stretching).

However, if a runner who routinely stretched was assigned to the non-stretch protocol, he/she was nearly twice as likely to sustain a running injury. Because of the number of participants, this single study proves that if you feel that stretching reduces your risk of injury, you should continue to stretch in spite of what experts tell you.

The same is true for foam rolling: if you feel it helps you avoid injuries, you’re probably right. While foam rolling immediately before exercise has been shown to produce a temporary reduction in muscle stiffness that may reduce the risk of injury (6), other experts recommend foam rolling after a workout (7), as the vigorous massage associated with foam rolling can raise cortisol levels, which acts as a natural anti-inflammatory to accelerate recovery.

Until recently, it was believed that muscles lengthen then suddenly shorten to generate the force necessary to propel you forward while running.

To prove otherwise, researchers from Brown University placed special sensors in the calf muscles and Achilles tendons of turkeys and forced them to run on treadmills (8). The sensors revealed that just before the calf muscles generated peak force while running, they isometrically tensed forcing the Achilles tendon to rapidly lengthen and snap back to return energy. The lengthening Achilles tendon essentially acted as a rubber band, storing energy from the forward motion of the leg only to return it to improve efficiency while running.

The Achilles tendon is especially well suited for storing and returning energy as it rotates nearly 90° before attaching, so it can store energy like a spring.

In young athletes, tendons are so efficient they are able to return 93% of the force needed to stretch them. Interestingly, the capacity of tendons to store and return energy decreases with age (i.e. running economy is significantly reduced in older runners because muscles are unable to compensate for the stiffer tendons) and in immature tendons (explaining why kids are so bad at sprinting).

The reduced elasticity present in older tendons explains why the perceived effort associated with running increases as we age, and why we slow down so much as we get older. Resilient tendons also protect muscles from injury as a flexible tendon acts as a buffer to store energy that would otherwise go into the neighboring muscle.

The good news is that researchers are coming up with ways to specifically improve tendon flexibility. Using ultrasonography to evaluate muscle and tendon flexibility, Anthony Kay and his colleagues from the UK had 17 volunteers perform a variety of different stretches, including conventional static stretches and the more complicated contract/relax stretches, while observing real-time changes in muscle and tendon resiliency (9).

The authors claim the most effective way to improve tendon flexibility is to place a muscle in a midline position and isometrically tense it for 5 seconds. This is immediately followed with a 10-second stretch. You then return to the original starting position, tense the muscle again for 5 seconds, and repeat the stretch for another 10 seconds (see Fig. 1).

When performed 3 times, the entire stretching routine takes less than a minute and results in substantial improvements in both muscle and tendon resiliency. Although the illustration depicts the stretch being performed on the Achilles tendon, it can be modified to be done on any tendon. Because the muscle is always tensed while in a midline position, I refer to this stretching technique as “neutral position stretching.”

While neutral position stretching is good for improving tendon flexibility, several papers have shown you can significantly increase tendon strength by performing isometric contractions with the muscle maintained in its lengthened position (10,11). Using the Achilles tendon as an example, stand on the stairway while holding a weight in one hand (or wearing a weighted backpack) and lower your heel so it is positioned slightly below horizontal (Fig. 2).

You should use enough weight so you are fatigued after 15 seconds. Repeat this maneuver 6 times on each leg. In just a few months, this exercise routine has been proven to markedly increase tendon resiliency and strength (11).

By incorporating bits of information from the latest research, old-fashioned methods of static stretching and even foam rolling may be replaced with structured stretches and exercises proven to improve tendon flexibility and strength. When performed consistently over a period of months, these stretches and exercises may reduce your potential for injury and possibly increase your overall performance.

5. Pereles D, Roth A, Thompson D. A large, randomized, prospective study of the impact of a pre-run stretch on the risk of injury on teenage and older runners. USATF Press Release 2012.

Figure 1. Using a belt or strap, place your ankle at a 90° angle to your leg and isometrically tense your calf for 5 seconds (isometric contractions involve tensing a muscle with no movement of the joint). Follow the 5-second contraction with a 10-second stretch by pulling with your hands (arrows). When repeated 3 times, this routine will improve tendon flexibility by 20% (9). 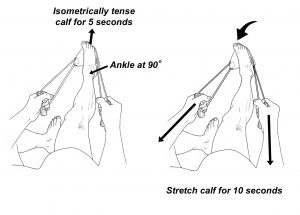 Figure 2. While wearing a weighted backpack or holding a weight in your hand, make yourself stable by holding onto a nearby wall or handrail (A), and slowly lower your heel off the edge of a stair step so it is slightly lower than horizontal (B). Hold this position for 15 seconds and repeat 6 times on each leg. There should be enough weight so you are fatigued after each repetition. Another option is to perform the exercise on a ToePro platform (C), which works the tendons of the toes, calves, and peroneals while they are all in their lengthened positions (arrow). 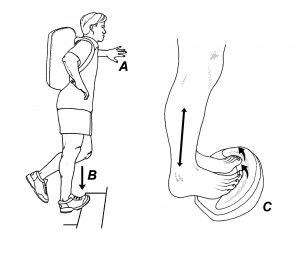 I knew this had to be the topic we did first, as it is one SO MANY are curious about (myself included). I hope this was helpful. If you have any questions for Tom, put them below, and I am sure he will get to them.

I have a ToePro exercise platform (like you see in the image), and it is incredible. Tom talked about it more in the podcast episode I did with him, but I would strongly recommend getting one if you need to work on your lower leg strength, especially if you have injuries that regularly appear there.