My Running Story: Part 2- The Climb (and Fall)

Last time I began with the very beginning, my first running experiences, but I left off when I started to train seriously….well, as seriously as a 14-year-old could……actually, no, that’s a lie. I see some 14 year olds train harder than I do now, but let’s just say my training became structured and the goal was to improve.

Remember I said that my first National Championships I finished 222nd and I vowed to be better.

I worked harder, put running as a higher priority, and we traveled all over the country to compete against competitive fields, so I could get used to the pressure.

The following year at that same race, I finished 40th, and that was enough to show me that not only had I made the right choice, but I wanted MORE! 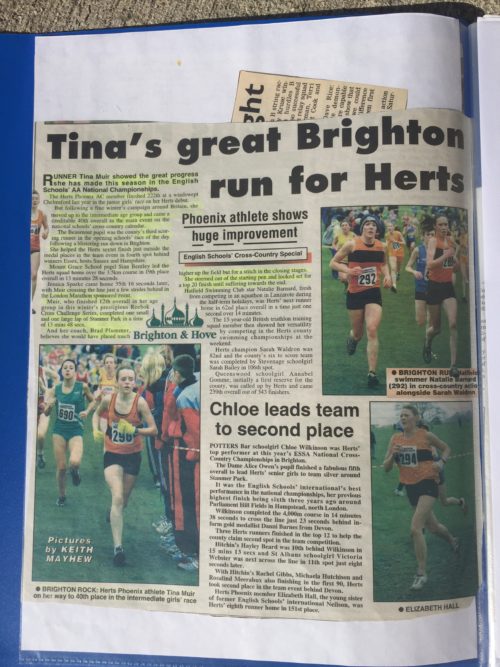 Running became my biggest focus in my life. I gave up some of the other activities I enjoyed including field hockey and more importantly, horse riding.

I had ridden horses from age 5-15, and it broke my heart to have to give that up, but I knew that I could not pursue both, and as much as I enjoyed the horse riding, I knew it had to go if I really wanted to get good at running. 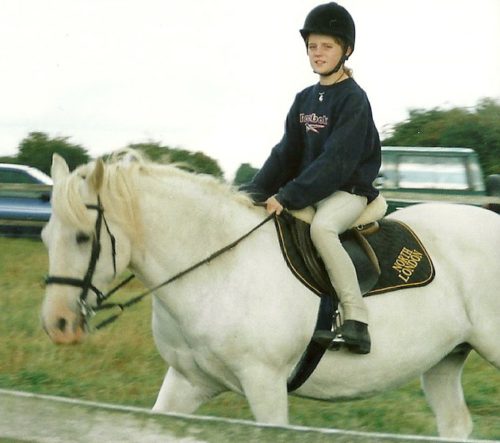 I started to win lots of races, be that girl who people would talk about before races, especially as I went to a running club and had a coach, I must be good, right? 😉

Unfortunately, as my reputation began to build, so did the pressure I put on myself. I started to get REALLY nervous, like so nervous I would throw up before races.

And then there was that time I lost my shoe with 800 to go in a cross country race.

Cross Country races in England are not like they are in the US.

We would run through mud so thick, it would require spikes in your shoes that could do serious damage (talking 5/8 inch). You would end up with mud all over your face that had been flicked up by other runners. You would slide around the mud, sometimes just trying to stay upright.

But yes, once I was running, and the mud, so thick my shoes disappeared, sucked my shoe right off my foot.

I kept going, and finished, running along crying I should add, but when we went back to look for it, it was gone…..no, not because someone had stolen it, but because it was literally buried by other races going by!

Cross country in the UK is no joke! 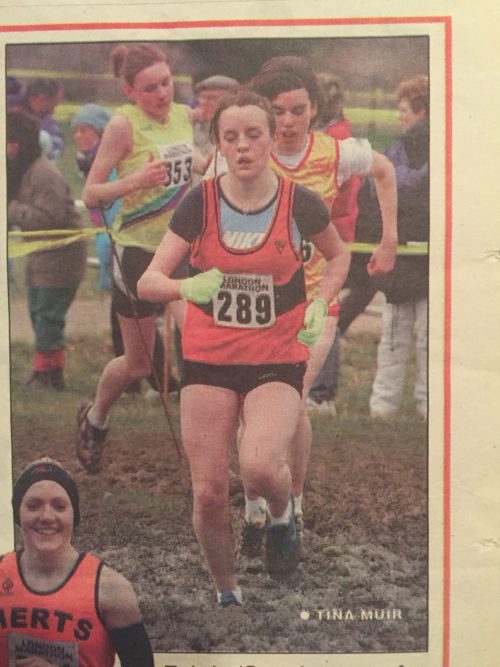 But I thrived on it, I loved working my way through the field, and finishing near the front. I did enjoy some of the track races (or athletics as we called it), but my heart was in cross country.

The tougher the course, the better I finished. I think that set the tone for my grittiness, and I started to really enjoy it.

Obviously not in the moment. It still hurt a lot, and was not exactly fun during those tough moments, but I just seemed to get stronger as the run went on, whereas others paid the price for a fast start. 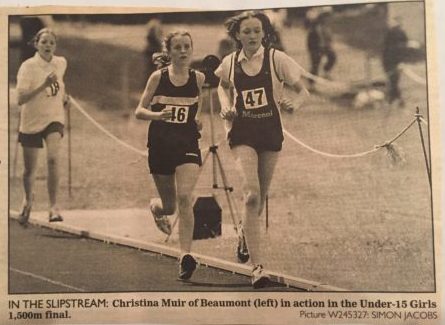 My coach, Brad had some fun workouts/sessions for me to do, and I also decided that it was time to go to a different running club after a lot of politics ripped my former club apart.

Although this meant a 1 hour drive 1-2 times a week to get to Bedford and County running club, I was going to be working with legendary coach (and Paula Radcliffe’s former coach), Alex Stanton.

I would do the track sessions with them, and they were hard, really hard. But it worked, I continued to improve, and ended up finishing 16th at English Cross Country Nationals that year.

I also did a lot of the local Open Graded track races at Watford.

These were very interesting. I am not sure if they are still on today, but it would involve you filling out a tiny piece of paper with your name and expected time for a track race.

The papers would then be sorted in predicted time order. You would race with everyone. You could be running alongside an 11-year-old boy and a 65-year-old woman, but a lot of my PRs were set there, the pressure was nice and low!

Unfortunately, it was around this time that I discovered a social life.

I started to go out with my friends drinking.

I started to eat a lot of junk foods, especially in the early hours of the morning.

I started to gain a lot of weight.

I started to lose interest in running.

I even remember my mum asking me one day if I still wanted to run, reminding me that her and my dad would still love me and think no different of me if I did give it up.

I was offended. How DARE she say that to me?

But, looking back, I would have done the same thing.

I was not committed, I was using running as a weight loss tool, and I did not really care for it.

I am not sure what happened, or why I headed in that direction, but somehow I did, and even though towards the end of my time in school I tried to pull back, only going out once a week. Not drinking, but instead drinking Red Bull (which looking back, was a much WORSE idea as I could not sleep!!!).

I had some fun memories and times with my friends, but my running passion was just lost. 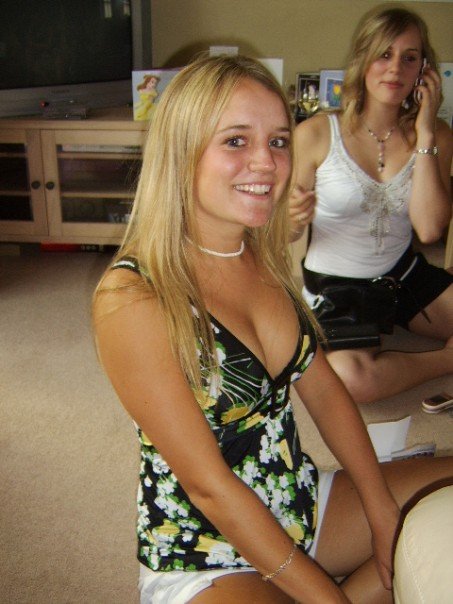 Not exactly the Tina you see now!

However, that being said, I am glad that time in my life happened. I believe things happen for a reason.

I was a teenager, and I did deserve to live a little, especially as now I have committed myself to it and give it most of my life, I can look back on that time with no regrets. It was better to go off the deep end as a teenager, than not and end up giving up in my early 20s like many runners in England do.

It allowed me to get to the “been there, done that” stage with drinking and partying.

While I was still heavy into the partying lifestyle. I still held a small candle for the running. I never gave it up, and I always wanted to keep that in mind when choosing what university I was going to go to.

I looked at some universities in the UK, visited them and tried to find which one my heart told me was right (have always been a heart person). I liked Birmingham University the most, which also happened to have one of the best coaches in the country (and still a mentor today, the legendary Bud Baldaro).

I was not good enough for Birmingham. University in England is TOUGH, and my grades were not high enough to get in. Not that I was a bad student by any means. I was very on top of my grades, and one of the teachers favorites, but it is just hard, very hard.

To get an A in something, you had to get over 80% right. Most of the time in Biology, I would get around a 60%, and I really really studied for it!

This is a post for another day, but lets just say school in England is intense.

I had some great options for university, but I also had some letters from universities in the US. These were definitely tempting, and I loved America, but in school, it had been drilled in my head that athletes who went to the US for university were trained into the ground until they were injured beyond repair, and then sent home.

I loved the idea, but Brad had been so careful with me, making sure that the best was yet to come, and I did not want to throw it away now.

I wrote in a forum, asking if anyone had been to university in the US, and what their experience was like.

I only remember one response:

It was from a runner named Paul. He was living in Orange County, California, and said that I should come check out the university he was working at, SOKA university in Aliso Viejo.

Orange County, California!?!! Are you freaking kidding me!?

Of course this grabbed my attention right away, and the other offers fell aside.

I did not want to jump to it, so I visited the campus for a week, and got to experience life as an American athlete.

I stayed with a girl named Emily, who is still a good friend of mine today, she even came to my wedding last year.

I loved it, and decided this was where I wanted to be, but I was not sure I wanted to jump right into a 4 year degree, so I stayed for a year while helping out as a volunteer with the track team.

Having a gap year is pretty common in the UK, and I thought this was a great way to get the spark back for running, and to see if this was somewhere I wanted to go.

Unfortunately, I was still not eating very well, and I was very out of shape. I did race unattached a few times, but for the most part, I was just kind of discovering who I was. 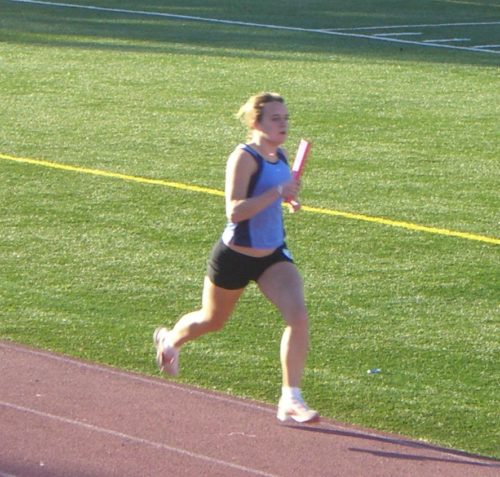 I helped some of the local parents in the area to get fit, and made some wonderful friends, who I still see whenever I can.

I also learned to surf, which is the only thing other than running a PR that gives me the same high, that same rush. If you ever get the chance to learn to surf, DO IT. It is amazing! 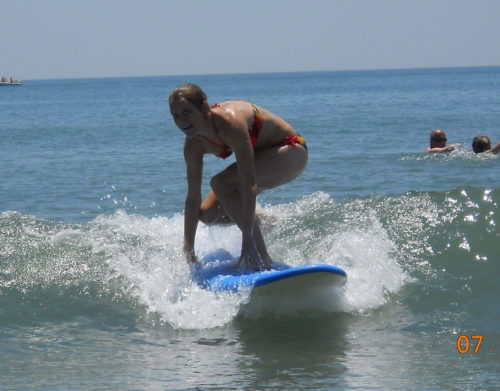 My 8 months in Aliso Viejo flew by, and somewhere along the way, I fell in love, deciding that I was going to go to University in America, no matter what.

I returned to the UK to go apply for my student visa.

I had decided I was not going to attend SOKA, as much as I loved being there, I wanted to go to a bigger school. I had UCI in my mind, but I had to attend a community college for a year to get the classes to transfer in.

I went to my visa appointment at the Embassy, confident and excited about my future in running.

But life does not go how you expect, and my visa was denied.

I had not even considered this as a possibility.

My life came crumbling down.

You were not allowed to even take a phone into the building, so I could not call anyone, I just had my arranged time to meet my mum a few hours later.

I wandered the street crying my eyes out.

The kind of comical crying you would see in a film. I did not care who saw me (actually, multiple people came up to me asking me if I was okay and what they could do).

What was I going to do?

It was too late to go to university in England for that year, I would have to wait a year to start. I went back to work at Fisher Outdoors (a cycling company), devastated, and probably the lowest I have ever felt.

But as life does, a curveball was about to be thrown my way….

What did your early running years look like? How is it different now?