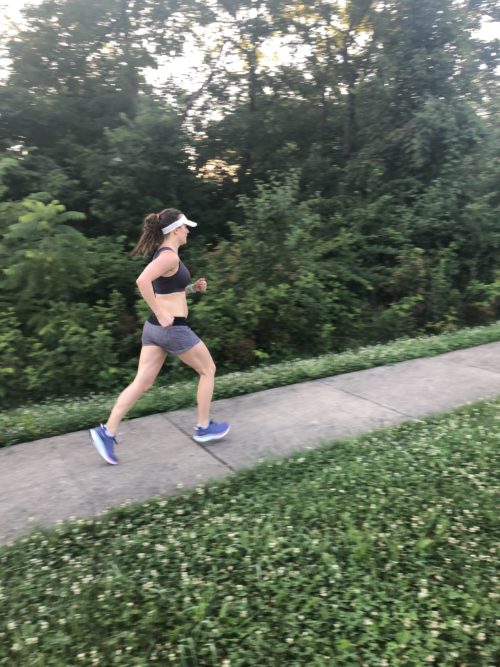 A Second Attempt at Postpartum running

When I announced that I was going to stop running to overcome amenorrhea, I knew I was prepared to do whatever it took to get my body to a healthy place. I made that my focus; being the best period-get-backer there ever was.

And like other things I had put my mind to, I did it.

Now, it is important to mention that a big part of this was the relaxing, the letting go of control, and saying, “It will happen when it happens”. I couldn’t take the same intensity to my approach of this goal as I had with my running goals. If I did want it to happen, allowing my mind to settle, to be at peace with my decision was a big part of my body feeling safe again.

Because of the way my story played out, I have been interviewed by a lot of podcasts and publications over the last few years, and in each and every one, in some way, I was asked the question about a comeback. Would I do it? How would I do it? When?

My answer was always the same:

I don’t know. I can’t say for sure, but I have a feeling in my heart that running will be a part of my future, and getting a Great Britain vest again in the future would show others (and of course myself) that having a child does not ruin all chances of running well, it can be done, and here is my journey to get there.

I would always follow-up that question with a variation of the same phrase, I am NOT going to rush back.

For the first few months I started running agin after I gave birth, I did really well keeping my ego in check, and taking it nice and easy.

I built up slowly, I made sure I felt good every day and did not push it. We carefully increased my mileage, and I was enjoying running again, for the fun of it.

Until it started to click back together, not so much in terms of speed, I was still a long way off where I wanted to be, but in terms of how I felt.

Once people started to ask me about how my running was going as one of the first things they would ask when they saw me, once the temptation of checking paces came into focus, once the number of miles per week crept up to a reasonable level. A thought began to creep into my mind, which race I was going to do as my “comeback”?

I was doing the one thing I said I wouldn’t, letting my mind to rush back. Allowing the imaginary pressure I had placed on myself to make me feel like I needed to be fit already.

And by now you know, it came crashing down, I ended up injured.

Now, I am trying again. I am on my postpartum return to running journey, this time take 2.

I have run over 30 miles the last two weeks, and even did a mini workout last week, surprising myself with how fast I ran for the uptempo portions considering I had to take almost three weeks off just over a month ago. I also ran with Bailey in the stroller three times last week while Steve was away at his high school camp. I really enjoyed those runs actually, in some ways more than a regular run as it removes the paranoia aspect of our minds, it distracts us.

I found that on those stroller runs, I was thinking about her, was she okay? Was the sun in her eyes? There is a turn coming up ahead. All things about running with a stroller, rather than thinking about how humid it was, how bad I felt, how I was tired.

In a lot of ways, that was really refreshing to remove the overthinking aspect of my body, and place it onto hers, onto the things I could control for her to make it as enjoyable (or relaxing as she was asleep) for her.

It got me thinking, we often want our road to be straight and narrow. As runners, we love to run tangents and get to the finish line as quickly as we can, that is what we are taught to do, do your best and get there as fast as you can. For that reason it can be really easy to apply that approach to everything about our running. We want to get to our goals sooner, our fitness sooner, our health sooner.

But when you think of your running journey in terms of a single run.

The most enjoyable runs are those runs where there are twists and turns up ahead. A straight line road might be great for a race, but those are the least enjoyable runs, where you just stare ahead, no excitement, nothing to see.

The most enjoyable runs are those runs where we have things to look at, things to keep our attention and keep us interested.

The most enjoyable runs are those where we are humbled, where we are challenged and we overcome those challenges to make it out the other side feeling stronger than ever.

So our running journey shouldn’t be that way either. Those turns in the road, where your running goes in a direction you want, where you have to retrace your steps and try again, where you are tested to see how committed you really are, that is where we see what we are made of, that is what makes our journey the most interesting, giving us the best stories.

The most motivational people we know are those who have used their adversities to make themselves stronger, to become more determined to reach the other end. For me, I know that is gonna be the case with this. I may not have made it back to race fitness with round 1, maybe I wont even make it for round 2, but one thing I do know, I have learned from my mistakes, I am trying again, and the turns in the road ahead of me don’t mean I wont reach my destination, they just give me a more exciting road to get there.

This was a great read and update on your running, Tina. I have nothing more to say 🙂 keep doing what you are doing.