Being an Athlete vs. Being a Skinny Girl Who Runs

I feel some word vomit coming.

This is gonna be one of those posts where I can’t stop.

I hope it doesn’t. I hope people see what I am trying to say here, but in the case that you think I am talking about you, PLEASE believe me when I say this is about me and my insecurities…..yes, I definitely have them.

This blog has been my place to share my doubts, my fears, my worries, and based on all the emails I get, I can only come to the conclusion that it helps some of you too.

If it helps some of you, then to me it is worth it. And if you need a little more help then listen to these episodes with Nancy Clark, Renee McGregor, and Dr. Jennifer Gaudiani.

So what is this aggressive topic I want to talk about today?

Probably no surprise when I say that it comes down to what does a runner’s body look like, in particular the female body, and how running changes your body.

Something occurred to me when I was in Amsterdam at the European Championships.

I noticed that the people in the city of Amsterdam were so much more active.

There were very few cars, so many people cycled everywhere; in their dress suits, to run errands, to travel around. And there was very little obesity….. from what I could see.

It wasn’t like all I saw was young fitness models, but everyone looked…well, normal. 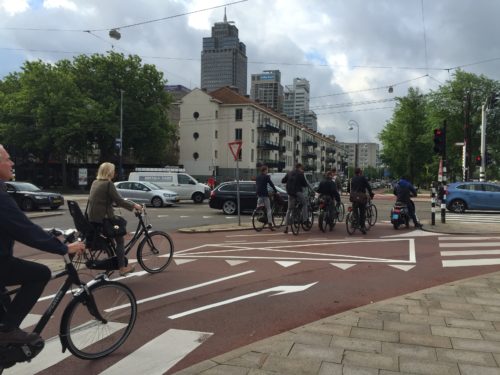 There wasn’t the other extreme either.

Surely that can’t be a coincidence?

Especially with the amount of patisseries and delicious tempting foods all around.

Could it really be that people just look after themselves better?

It got me thinking that maybe this focus on being more active actually has everyone thinking in the right mindset; balance is key, everything in moderation.

We hear it all the time, but maybe this was it in reality.

People were not on “diets” or restricting (from what I saw). They were not going overboard with exercise, just incorporating it into daily life, which meant that exercise was not a chore, nor was eating healthy.

It meant that there were less eating issues the other way too…..as the fear of obesity was not as strong.

Most importantly, everyone seemed so much happier. There was no road rage, even when you got in someones way. There was no anger in people’s eyes, or sadness and guilt after meals.

Just laughing, smiling, and being kind to everyone.

I honestly think that was because there is not the deep down insecurity that we have in the American (and British) culture.

Now, I just wanna say that this is based off MY observations, I have no idea if there is any truth behind this, or what the rates of obesity or eating disorders are. I am just basing this off what I saw.

One thing I loved, was seeing this giant billboard on the side of one of the buildings near our hotel, featuring one of the darlings of Netherlands Track and Field; Dafne Schippers. 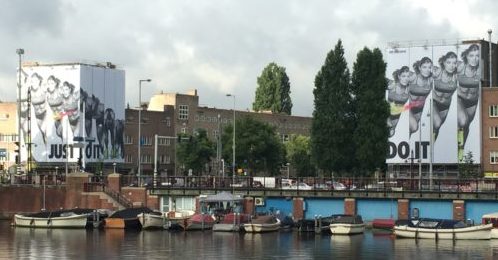 I had a few thoughts about this:

Firstly, HOW COOL IS THAT?! A track and field athlete on the side of a building! The sport of running is obviously a priority here, and I love that.

She is so beautiful, and strong….a true athlete.

She has her best version of a runner’s body. 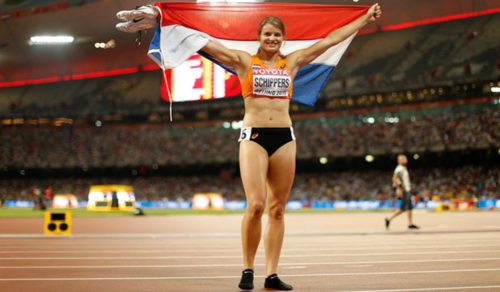 We come in every shape and size, and that should be celebrated.

There is no one type of runner body.

Drew had talked to me about this before in the past. How many distance runners were not athletes. They were just skinny people who could run fast because they ran a lot, but their posture was awful, and they were actually very unhealthy by the way they ate and the way they asked their bodies to do so much with so little.

In their eyes, they had the marathon runner body, but to the rest of the world, their runners face looked sunken and hollow.

We hear this more and more; fit but unhealthy.

I hadn’t really understood what this meant until recently.

Surely if you are skinny and toned, you are healthy?

That means your body is efficient and metabolically sound, right?

I realized just how unhealthy I actually was when Tawnee analyzed my lifestyle, and since making the changes to that, along with adding the strength training with Drew, not only do I look different, but I feel different. I feel stronger.

Not just like I can run faster stronger, but I feel powerful. I feel like I could move to other sports without too much of a problem (other than obviously the skill development aspect).

When we went to watch the European Championship meet itself. We watched some of the best athletes in the world compete, and my suspicions were affirmed.

These women were beautiful.

Strong and powerful, but curvy and feminine.

It just made me realize that I have plastered this unrealistic image in my mind of what I want to look like. Plastered the image of a very lean, tiny, 6 pack, veins popping female who I wanted to look like, but now I see that this image is not healthy for me.

Yes, some women are genetically predisposed to be lean and toned. They can eat whatever they want and still look long, lean, and defined.

Health comes in all shapes and sizes, but that is not right for my body, and striving to get there was an impossible ask, and one that left me feeling bad about myself and ready to punish my body for not looking how I wanted, rather than celebrating it for what it has achieved.

Not even to mention the fact it would probably require some form of restricting calories or under eating to get there.

Instead of looking at what my body does for me, all that it has done for me, there was that temptation to make it look “better”…..but better wasnt making it feel better, but making it faster.

And as much as I talk about Be Brave. Be Strong. Be You., there was still that nagging voice in my mind telling me that I needed to look thinner to run faster to be taken seriously at the top-level.

Thankfully, I could ignore those voices for the most part, and my sweet tooth was just too strong to allow me to really go for it with the clean eating, but being in Amsterdam and seeing these women made it click into place.

Tawnee had talked to me about it. Told me that she felt more confident in her body now than she ever did in the past, even though she was heavier than in the past.

At the time, I thought that maybe that would be the case for her, but for me, I didn’t want to look like a twig, but at the same time, a little leaner wouldn’t do me any harm.

That being said, throughout this, I was never prepared to sacrifice fueling my body correctly for those extra pounds.

I have always been a believer in overeating rather than under eating, and if you missed my interview with Tawnee on Endurance Planet, you will hear us talk about this. Caloric intake has never been an issue with me. 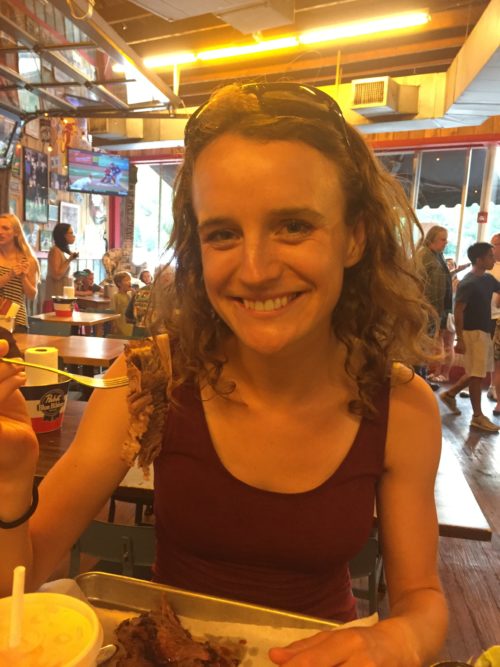 I don’t want to look like that image I had branded in my mind anymore.

I had that perfect runner body in my mind, but I did not see the other parts of it that would be required for me to get there, what I would lose in the process to get there:

No curves. Sucked in stomach. Sunken in face. Hunched over posture. Walking with a limp.

I realized that I just don’t want to sacrifice my health for a few seconds in a race.

I want to live a healthy and happy life.

We hid the scale a few months ago, which was step one, and I immediately felt better knowing that I was just focusing on eating the right foods, rather than letting that number dictate my day.

I want to be a female athlete.

I want to be a role model for younger girls to strive to be.

Not that impossible figure that even I, after 12 years of running could not attain……..without playing a dangerous game with my eating.

I want to be real.

I want to run fast, and show that you do not have to weigh under 100lbs to run fast.

YOU and YOUR BODY are unique and beautiful, and you need to embrace your strengths.

Find your strong, and believe in it.

If that means you eat too much, that you are a little heavier than some stupid calculation of race weight says you should be, then screw it.

As long as you eat well, get those foods in to help you recover and be healthy, that is all you can ask. Cross train, and dont be afraid of other activities.

Become an athlete. Not a skinny person who runs.

The opinions in this post are based off my experience and the image in my head I was striving to be. I am trying to say that there is no one way to look like an athlete. I just want us all to avoid being one trick ponies who all look the same. I hope I do not offend anyone with this post, I am all about embracing every body type.

What was your impossible image? Will you join me in believing in YOU?