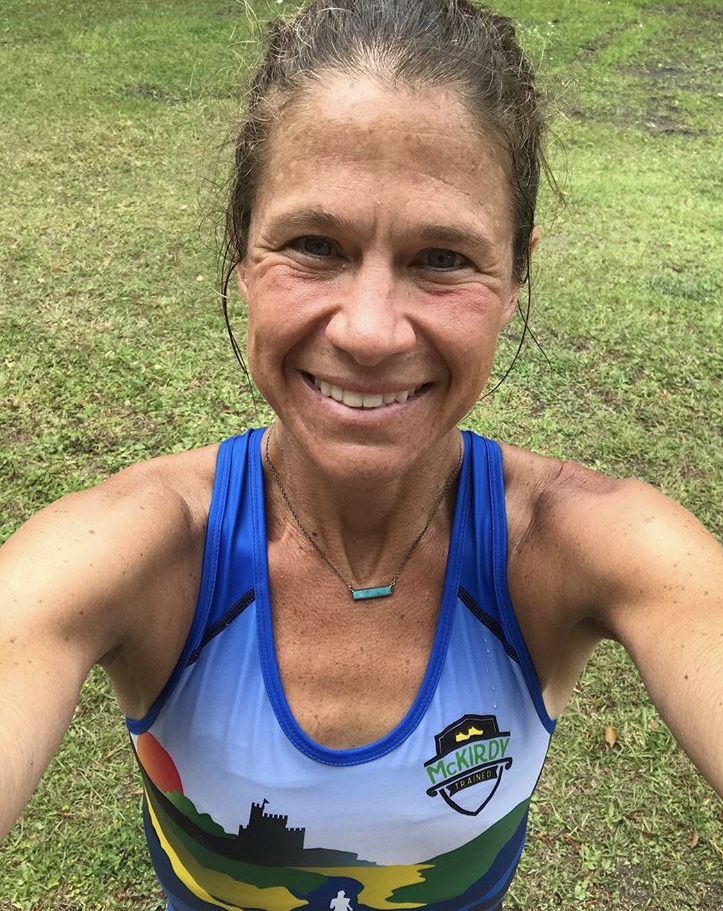 Our lives are full of ups and downs.  Each of us embark on our own journey that many other people may know nothing about.  Kate Landau, one of the fastest master’s marathon runners in the world, is one of those individuals who has fought her own physical and psychological battles involving eating disorders and a constant need to be the best, which had major implications on her social life and emotional health.  Kate shares with us her journey and how she was able to overcome these issues and compete in the Olympic Trials at the age of 19 and also 43.

Kate was destined to run.  As a sixth grader she was running, winning races, and gaining the attention of running coaches, which lead to her being placed on a Junior Olympic Training plan.  Kate went onto compete in the Junior Olympics and qualified for Nationals.

As a seventh grader Kate began racing against high school age individuals and placed 2nd in the State Meet, losing only to a senior.  Realizing her true potential as a runner, Kate began to watch girls older than her go through growth spurts and slow down, causing them to lose speed and races.  Kate decided she wanted to stay small so she could continue to be fast.  Terrified to lose the success she was having, Kate turned to an eating disorder in order to maintain her weight and continue to compete at a high level.

Calorie counting became Kate’s life.  She began cutting out solid foods and drinking only juices.  If she did eat, she ate small portions.  Kate calculated that she could burn approximately 100 calories per mile she ran, so if she were going to run 8 miles, she would eat 800 calories.  Weighing herself became an addiction and she did this daily.  She lost friendships and chose not to establish relationships due anorexia and her decision to not eat.  Kate said it was a lonely feeling, living in this existence and trying to hide her disorders from other people.

While Kate was a competitive athlete, she was also a competitive student.  She had to have straight A’s and wanted to be her school’s valedictorian.  She was constantly under stress due to studying, training, and hiding her eating disorder.  While Kate was seeing success in both academics and athletics, she prayed to have this disorder taken from her but she didn’t know how to let it go.

Due to a lack of nutrition and constant training, Kate’s body began to break down on her.  She suffered multiple injuries throughout her college running career, including up to 25 stress fractures and was told by doctors she had the bone density of a 65 year-old-woman.  However, despite her injuries and eating disorders, which continued into her 30’s, she still continued to compete at a high level and make it to Nationals each year at Georgetown.

At the age of 19 Kate competed in the Olympic Trials and did an interview for the New York times regarding her eating disorder.  She pretended like she was over it and denied having an eating disorder, noting that she had gained some weight.  But, this was not the case.  Kate’s battle was far from over.

Kate eventually stopped running due to the injuries her body was sustaining and took up cycling.  She began cycling 3-5 hours a day.  But, due to her eating disorder, she eventually was not able to cycle for even thirty minutes without getting and becoming completely fatigued.  Depression had been an ongoing issue, coupled with a complete breakdown of her body, Kate decided it was time to admit she had a problem and seek out help.

A Google search helped Kate learn more about eating disorders and locate a doctor that could help her.  She also began meeting with a nutritionist who helped her establish healthy eating habits.  These two things, combined with medication helped Kate begin to see the world in a new and brighter light.  She adopted a dog, started socializing with people at dog parks, and several months later, much to her surprise, got pregnant.  By the time Kate became pregnant her whole outlook on life had changed and she was in a better place, both physically and emotionally.

Kate began running and pushing her daughter in a stroller during training runs.  Eventually she ran a 5K Turkey Trot at a 6:08 pace, and then a half marathon.  Running became about the joy and satisfaction of being out exercising as opposed to the constant need to win and compete.  She eventually worked her way up to a marathon and placed second overall.  She then ran Boston in 2:40, placing 2nd in the Master’s division, a 2:35 at Eugene, and a 2:33 at Chicago.  Kate then went on to run in Atlanta in the Olympic Trials, finishing 14th overall with a time of 2:34:07, at the age of 43!

Kate has stopped limiting what she easts and doesn’t allow herself to go hungry.  She has stopped constantly weighing herself and is enjoying her new found freedom.  Through her struggles Kate has gained invaluable life experience, which has aided her in becoming the mother and runner she is today.  The struggles that we face, both public and in secret, provide us with advantages and life experience that can help us push through the pain we experience in life, or the pain we experience at mile 20 of a marathon.

It is important that we don’t focus all of our energy on the future and that we choose to live in the present.  Worry about the things that you have control over.  Take those challenges that are thrown at you and push through them.  What you do in middle school or high school does not create or influence who you are for the rest of your life.  If you find yourself struggling with problems, don’t be afraid to seek help, because when you get through them, and you will, you will come out a better and stronger person.

*Note* If you or someone you know is struggling from an eating disorder, it is time to talk to someone about it, it can make all the difference in the world.. Contact the National Eating Disorder Hotline at (800) 931-2237 or visit the NEDA website.

Thank you to my wonderful sponsor Tracksmith for sponsoring this episode of the Running for Real Podcast.

Tracksmith is a Boston based running clothing company that truly cares about the quality and care of their running clothes. Running can be a demanding lifestyle for our clothes, they definitely go through the wear and tear to where we may be purchasing new clothes constantly. Tracksmith designers truly work with the finest materials and think of you as a runner in mind with spots for your keys, phone, and fuel.

You can get 15% off your first purchase, click here and enter code TINA.

Thanks for listening! I hope you enjoyed today’s episode.

Thank you to Kate, I look forward to hearing your thoughts on the show.