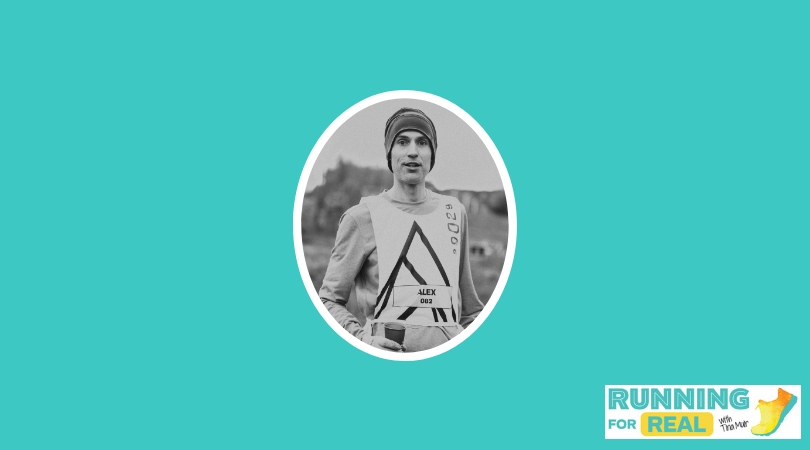 Alex Hutchinson: How to Build Up Your Running Mindset R4R 097

Running with an Elite Mindset

There has been a lot of talk about breaking the 2-hour marathon over the past year. In 2018 Eliud Kipchoge finished with a time of 2:01:39 at the Berlin Marathon, beating the previous record by over 40 seconds. Many believe that the sub 2-hour marathon will happen in the next five to ten years when just a few years ago scientists were saying that it was impossible for a human to complete such a feat.

Completing such an impossible task takes more than just a perfectly fit physical body and optimal running conditions. To break this type of barrier, the mind has to be just as fit as the body. “Your brain has all sorts of very clever and hardwired ways of trying to convince you to stop things that are hard,” says Alex Hutchinson. If there’s one thing that I am certain is hard, it’s running a marathon in under two hours.

Alex Hutchinson, Ph.D., is an author and journalist who focuses much of his energies on human endurance research. He is also a former middle- and long-distance runner on the Canadian national team. In today’s episode of the Running for Real podcast, Alex adeptly articulates his thoughts on the impact of running with an elite mindset, and what that means today. This is not one you want to miss.

Controversy and excitement always surround new inventions and discoveries that help to break world records. It can be difficult to distinguish between what is new and true and what is simply a coincidence (think of any short-lived diet fad). Sometimes it’s less about what works, and more about whether it is fair (like any number of banned drugs). Two interesting and seemingly unrelated ideas that may have an impact on the sub 2-hour marathon are shoes and smiles.

The Nike Zoom Vaporfly 4% was the first shoe to cross the finish line in the 2018 Berlin Marathon. This shoe has now been worn by about half of the top 3 runners in each of the major marathons recently. The Nike Zoom Vaporfly is light, well-cushioned, and has a thin carbon fiber plate that supposedly gives a spring-like push to propel the runner forward. Purists argue that this shoe changes the run enough that it is no longer fair to compare those that have run without them, to those that have run with them. The shoes have yet to be banned, but don’t be surprised if broken records aren’t taken as seriously by those that run with them.

In a recent experiment, scientists discovered that runners who smiled during a run compared to those that frowned, experienced a running economy that was 2% better. Smiling, whether naturally or deliberately, has been found to increase productivity, healing-rate, and a number of other things over the years.

But is smiling always a positive thing? For Alex Hutchinson it’s about the situation. While training Alex realized that when he smiled, he felt surprisingly better. He finished a set with more energy, but his pace also slowed. Obviously, running slower makes you feel better.

However, when Alex is running paced splits, he does the best he can to relax his face. When you know your pace won’t change, then smiling can reap the benefits. But if an intense face is what gets you running fast, then put on your best snarl. In general, it is better to mix things up occasionally.

Do Your Workout, Not the “Best” Workout

Another common pitfall when training is to compare your training program to your competitors’. You know your body better than anyone, and doing your workout can be much more effective than doing someone else’s.

Alex gives an example of changing his training to match one of his friends. Both Alex and his friend would beat each other in races about the same number of times, but Alex’s friend had a training program that was much more grueling. When Alex tried to complete a similar training session, he felt defeated, not able to even finish the workout. But he remembered that he could compete in the actual race with his own workout.

An important part of an elitist mindset is faith in your way. If you believe in your stride, your training, and your body, you can spend less time comparing yourself and more time winning.

A great mindset to have when running a long-distance race is a progressive one. Start off the race with less intense, more relaxed thoughts, and as you near the finish line, have thoughts that give you the grit you need to dig deep. Sport psychologists recommend having planned thoughts during certain parts of a race. For example, plan on thinking about your dream home during mile 5-8, think about your form during mile 12-14, and think about that bully from middle school during mile 22-23.

It’s just as important to exercise your mind as it is your body. Smile and snarl with purpose. Visualize and meditate. Practice having different thoughts during your workouts and see what works best for you. As you practice, you will find a mindset that helps you become the runner you want to be.

The wonderful sponsors for this episode is ME about my new book and Inside Tracker.
Overcoming Amenorrhea: Get Your Period Back. Get Your Life Back.
It’s coming out on January 21, 2019 and available for pre-order NOW. I can remind you when it is available if you sign up here Running4Real Newsletter. Thank you SO much for all of the support my friends!!

Sometimes our bodies act in weird ways that don’t quite make sense. Often our bodies show that stress when we have blood work, but the results from the doctors can be confusing. I love using Inside Tracker to get my test, get the results assessed for me, and get the recommendations of what I can eat and do to improve my health.
I recommend Inside Tracker High Performance Test
Use coupon code TINA for 20% off.

Thank you to Alex, I look forward to hearing your thoughts on the show.